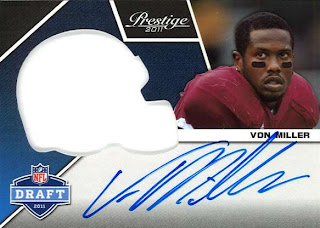 With the NFL Draft this week we have already seen Leaf beat everyone else to the draw with 2011 Leaf Metal Draft football, an unlicensed product. Over the next month we see a slew of NFL releases hitting the shelf and everyone will most likely be grabbing up the licensed products. One of the next products to drop will be Panini’s 2011 Prestige Football hitting May 18, 2011.

Panini has posted up some preview images of some of the hard-signed autograph hits including Ryan Mallett, Jake Locker and Von Miller. Because of the time frame of the release these cards do not include team names or logos but there will be relic cards included with the autographs. You may notice that Panini seems to be experiencing a bit of an identity crisis, the designs range from decent to down-right awful.

You will notice with the Mallett cards, the first one will be a relic (contained within the helmet die-cut) autograph card. This is actually a decent design; there is a nice image of the player along with a similar sized relic and a nice placement of the hard-signed autograph. The design is pleasing in color and style; nothing seems out of place, no floating relics or sticker autograph. This is a nice card. 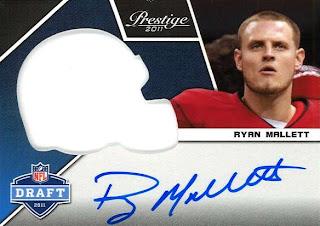 But with the next examples you begin to question the logic in the design phase. In the second autograph card the player image has been shrunk down to dime size and moved to the upper left corner to be balanced out by the Prestige logo on the opposite corner. The NFL Draft logo now takes precedent over everything including the player’s autograph, which you will notice was actually forced off of the bottom of the card. The player’s name, position and height/weight have awkwardly been placed around the card in a non-discerning manor. If Panini wanted to shrink the player’s image the only reason should have been to highlight the player’s autograph in the center of the card and the image should have properly been balanced. As you can see that is not what happened. 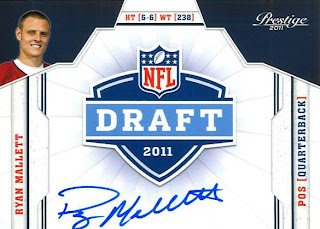 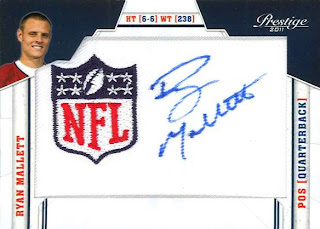 The manufactured patch autograph cards leave a large negative space along the bottom border of the card, just enough to draw someones eyes away from the autograph, which is a graphic designer "no-no". To correct this injustice Panini should have dropped the player's name, position and height/weight from around the manu-patch and instead placed the player's name along the bottom border of the card which would balance the card with the autograph and logo/patch. 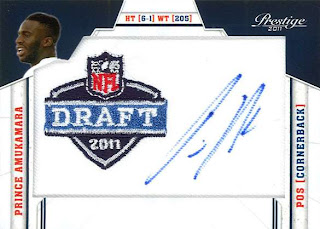