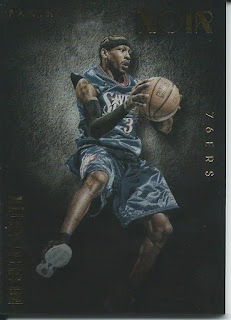 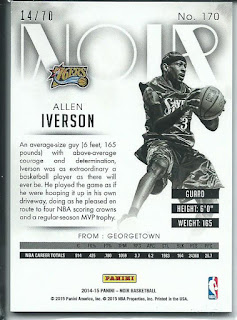 A couple of weeks ago, shortly after the NBA Hall of Fame induction, I was going through Allen Iverson cards. Probably not the best time to do it but I figured while I had his stuff on my mind I might as well look.
Iverson is one of my basketball mini-PCs so I came across some neat cards but it was his 2014-15 Panini Noir card that got me bidding. Normally Panini’s high end Noir cards are outside of what I want to pay for a base card but I think I just got caught up and the bidding didn’t get too bad with just over $10 shipped.
The checklist is broken in to two halves with cards #1-100 being black and white and #101-200 being color, this means each player has two cards with one on each side of the checklist. I am happy Panini decided to make each card a different image of the player, especially when you are paying $450+/box I would hope they didn’t use the same image. I wouldn’t mind picking up Iverson black and white #70 card but I wouldn’t pay the price that is being asked right now.
Posted by Corky at 9/27/2016 08:03:00 PM