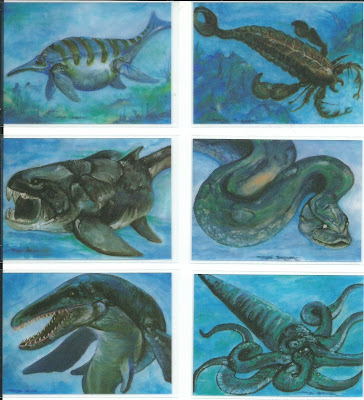 Last year, after a successful Kickstarter run, Monsterwax released Dinosaur Galaxy. This was one of the 4 dinosaur related sets that came out last year so it was kind of lost behind the Upper Deck Dinosaur release and the Topps Dinosaur Attacks release (part of the Mars Attacks set). The other dinosaur set released last year, in case you are wondering, was Breygent Jurassic Domination.

Monsterwax’s Dinosaur Galaxy was a 123-card base set with four inserts; a 6-card acetate Liquid Leviathans, 6-card Magnificent Megafauna, 4-card lenticular 3D Dino-motion and the 40-card Bone Wars cards (which were replicates of the first 40 sketch cards). The hits include printing plates and sketch cards.

I am interested in mainly the sketch cards with the dinosaur sets but when I came across someone selling the entire 6-card acetate set for $8 plus shipping I couldn’t resist. I will admit I was pretty underwhelmed by what I received. I was hoping for something more comparable to the insert Monsterwax was trying to imitate, the Upper Deck Predators of the Sea from their Dinosaurs release. Now Upper Decks cards are shadow box cards, and very awesome, so I wasn’t expecting that but I guess I was expecting more.

These cards are not really acetate but more like a single lair lenticular card. I appreciate the effort but this set just does not seem really like an insert as an afterthought. The illustrations are nice but there are no markings, not even numbers, on the cards so you are at a loss of which way is front and which is back. The illustrator’s signature at the bottom is difficult to read so that doesn’t help. I did notice that one side is smooth and the other has a bit of a texture so I am guessing the smooth side is the back.
Posted by Corky at 9/19/2016 03:48:00 PM