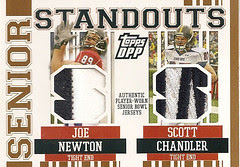 Some pretty decent patches as far as patches go considering who the players are.

Joe Newton went undrafted in the 2007 NFL Draft and signed with the Seattle Seahawks, he currently sits on the Seahawks practice squad and has never played a professional down in the NFL.

Scott Chandler has done a little better, drafted in the 4th Round of the 2007 NFL Draft by the San Diego Chargers. He played in 1 game for the Chargers and was waived after the 2008 season. He is currently on the Dallas Cowboy's practice squad.