The Championship Packs Are Here 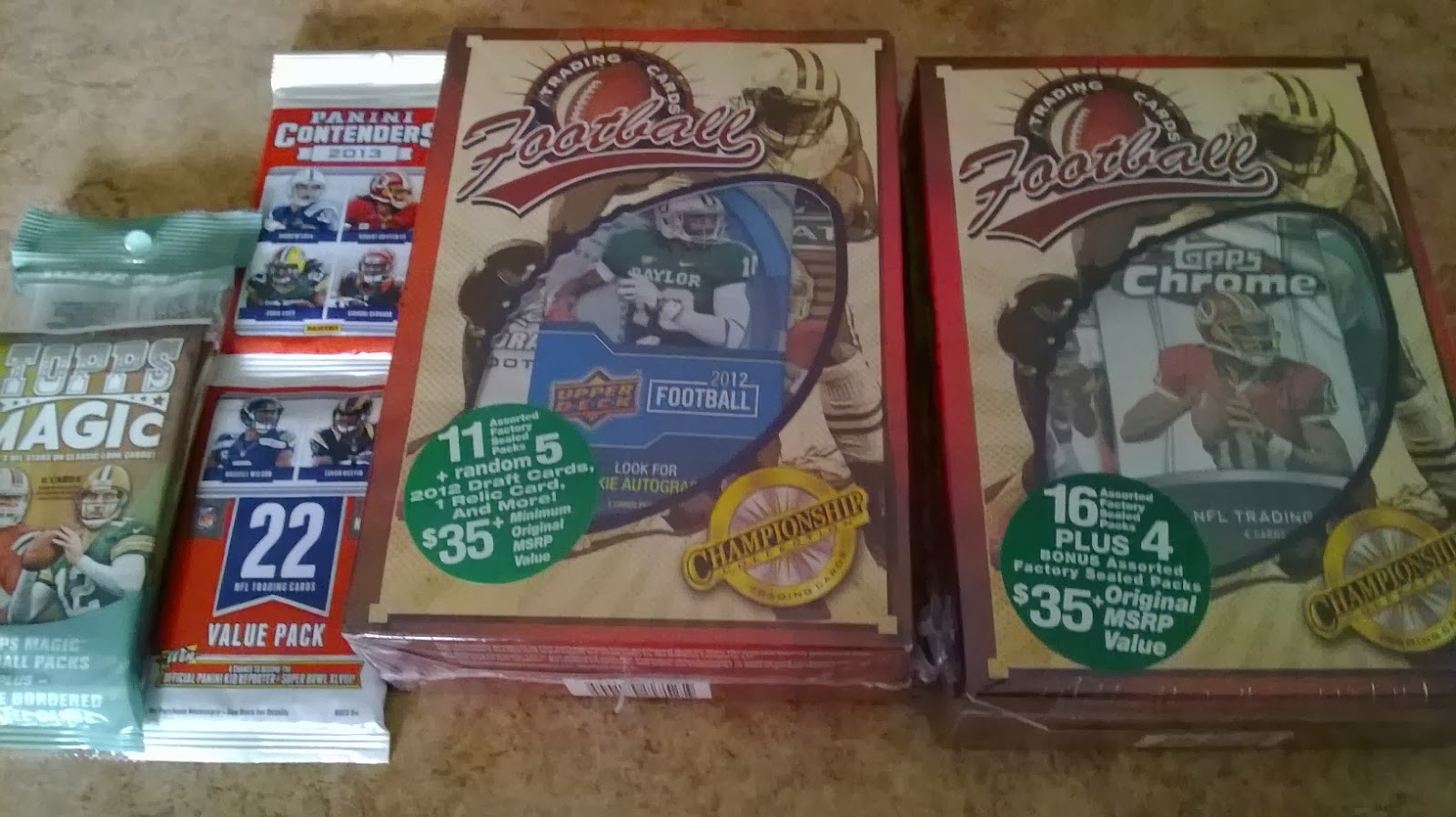 I picked up my Championship Football repacks today for Sports Card Super Bowl IV. I made sure to grab two different types to get a variety, the boxes were supposed to contain 31 packs, 5 Leaf Draft cards and a relic card. What I actually got was 33 packs (including a 2012 Topps Magic rack pack with three packs and 3 mini blue parallels), 5 Leaf Draft cards, a relic card, 4 random inserts in penny sleeves and a pack of 2012 Panini Football stickers.

I also picked up a 3 pack 2013 Topps Magic football rack pack (includes 3 orange parallels) and a 2013 Panini Contenders value pack. These cards will be the overtime packs if the score is too low or tied.

The 33 repacked packs range from 2010 through 2013 and include packs from the major card companies; Topps, Panini, Upper Deck, Leaf, SAGE and Press Pass. The breakdown:

The Frustrations Of A Ghost


When it comes to collecting specific players or teams there can be frustration, hunting down the cards can be difficult and with today’s never ending parade of rainbow parallels it seems even worse. Now you not only search for the base card but you are also chasing down the colored parallels, the chrome versions, the platinum versions, the five different refractors and the special short-print, diamond refractor photo variation printed on the back of a pure 24k gold chocolate chip cookie card.

The one frustration that seems to get at me the most though is the “Ghost” card. The card you swear you have seen in your collection but when you are looking for it the card is no longer there. My phantom card is the 1995 Pinnacle Ken Griffey Jr. card, #128. The card where he is blowing a giant bubble. I swear this card is in my collection but I cannot find it. I have a binder specifically for my Griffey collection, all of his cards go in this binder and once they go in they do not come out. It just drives me crazy that I know I had this card but it now has disappeared. 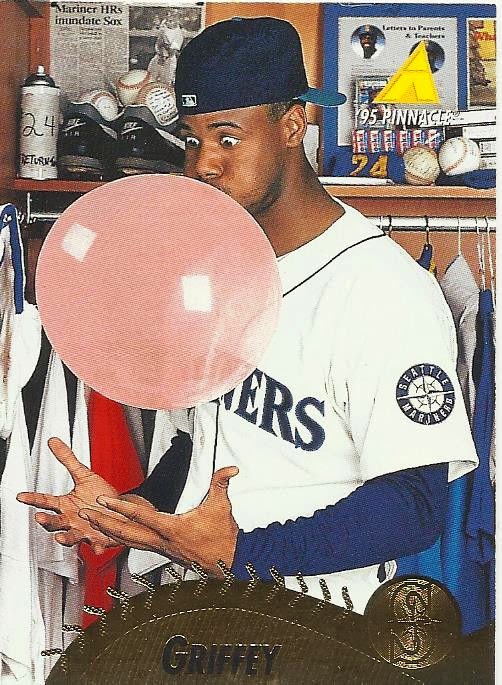 
Earlier this month Daniel Wilson from It’s Like Having My Own Card Shop offered to help me reach my blog goal of 100 followers. He held a contest using his own cards as prizes to help me attain my goal. I was touched by his generosity, I wanted to reach out to a fellow blogger and pay it forward by helping someone reach their goal.

I have been reading Fuji’s blog The Chronicles of Fuji for years and one goal that he has carried over for a couple of years was to add a T206 card of a Philadelphia A’s player to his Athletics personal collection. I have a collection of 1909-11 T206 cards and by luck I happen to have a card of Doc Powers, a Philadelphia A’s catcher. I sent a care package built around the Doc Powers card to Fuji to help him attain his goal.

Being the generous person that Fuji is, knowing that I am a Seahawks fan, he sent me some Seahawks cards as a “Thank you”. A great selection of mid-90s inserts plus two relics and two autographs.

During the 1990s the Seahawks were in a drought, they had a couple of .500 seasons but they tended to lose more than they won and even when an opportunity arose with the #2 pick in the 1993 draft they selected Rick Mirer over players like Garrison Hearst, Lincoln Kennedy or Hall of Famer Willie Roaf. There were some highlights though in Joey Galloway and Chris Warren so the games were always fun to watch. So I was quite delighted to receive a number of Galloway and Warren cards. 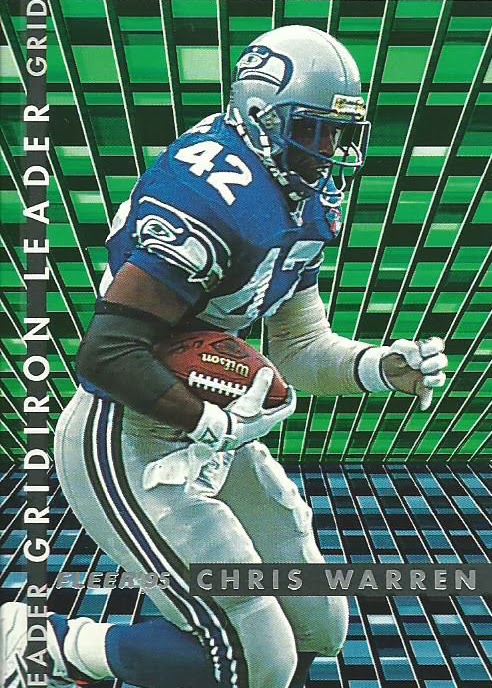 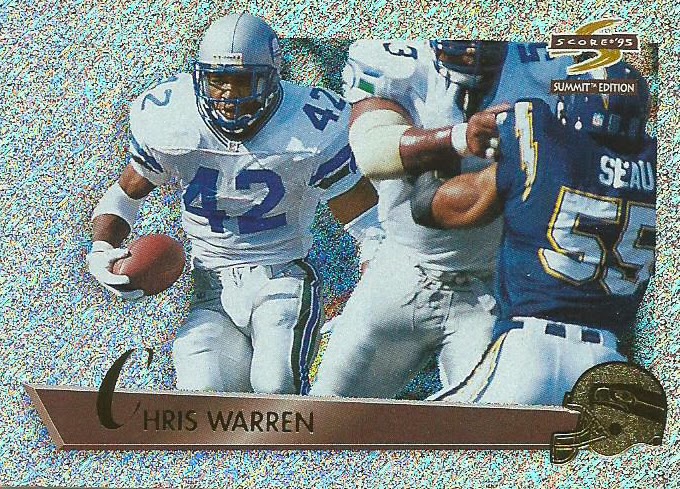 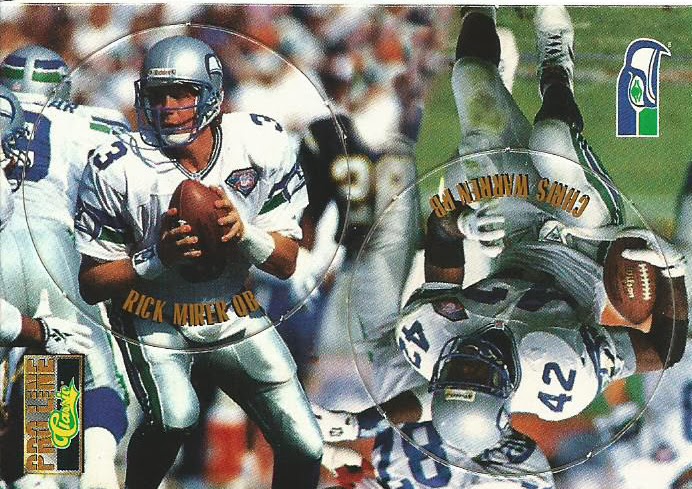 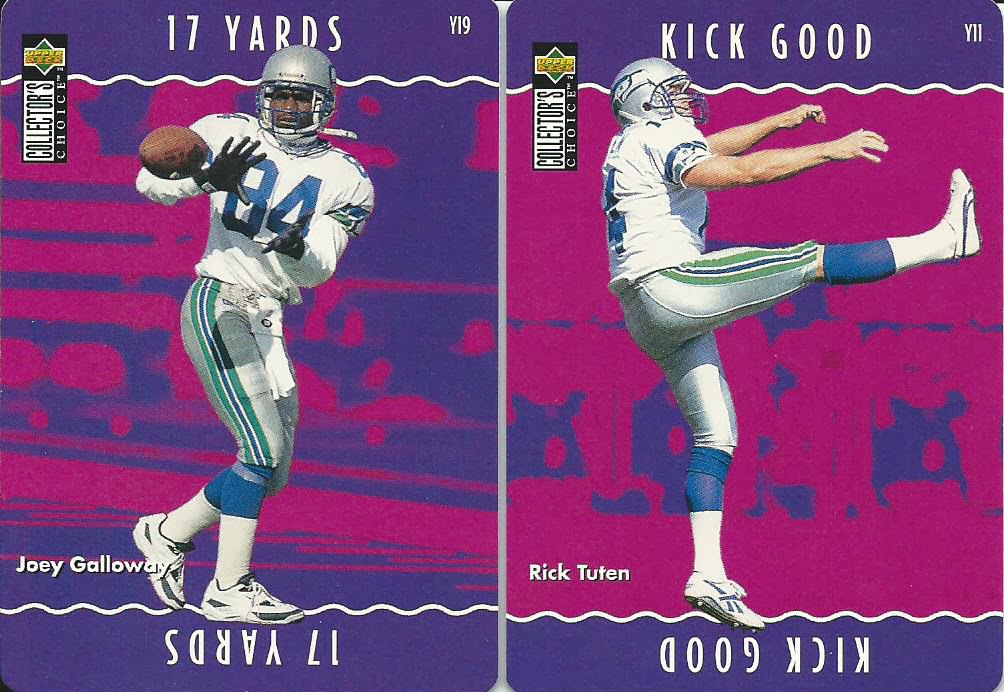 My favorite cards are the Teammates dual card of Galloway and Warren, these cards are the perfect example of the flash of the 1990s inserts. The cards are die-cut down the center in a zig zag type pattern so when they are put together they create one large card. I am torn because the cards are going in to my binder but I want to display them connected. I know, First World Collector Problems. 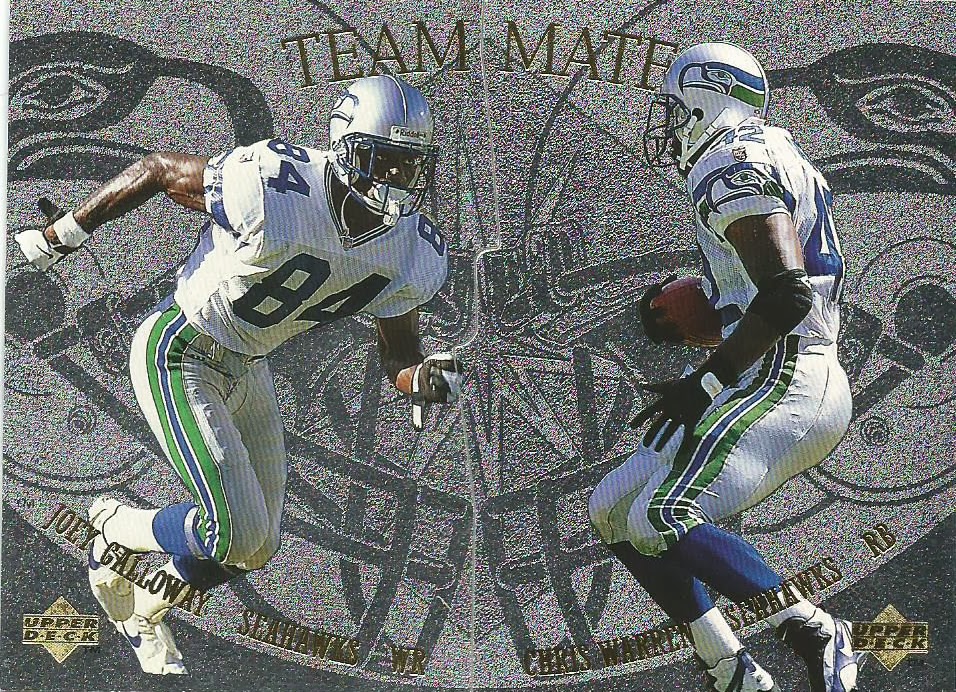 I have to admit, there are a number of Seahawks players that failed as pros but they are among my favorites no matter what. The list includes Brian Bosworth (I am a huge Boz fan), Rick Mirer, Aaron Curry, Lofa Tatupu and Mike Williams. Fuji, not knowing this, included a couple of Mirer cards and a Curry relic card, pretty cool. 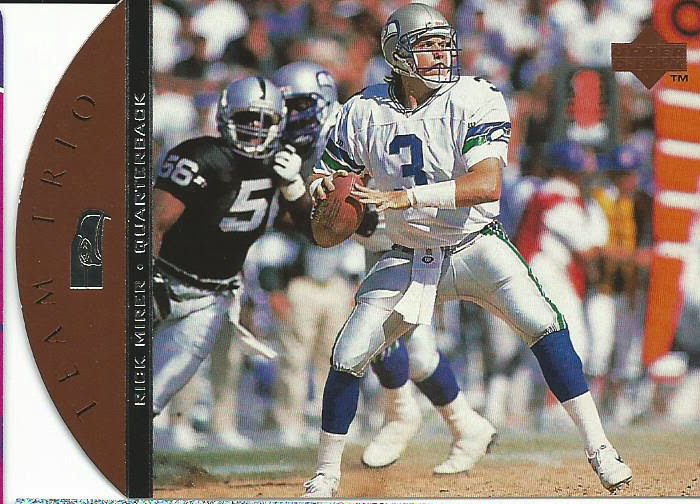 A Curry and Turbin relic and a past/current Seahawk Tarvaris Jackson autograph. 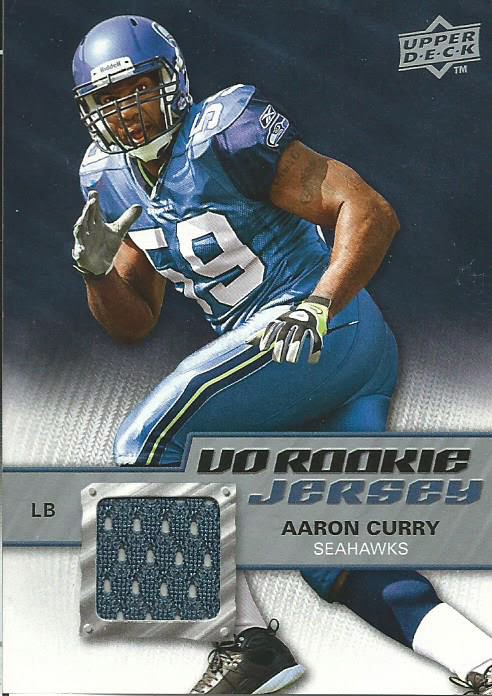 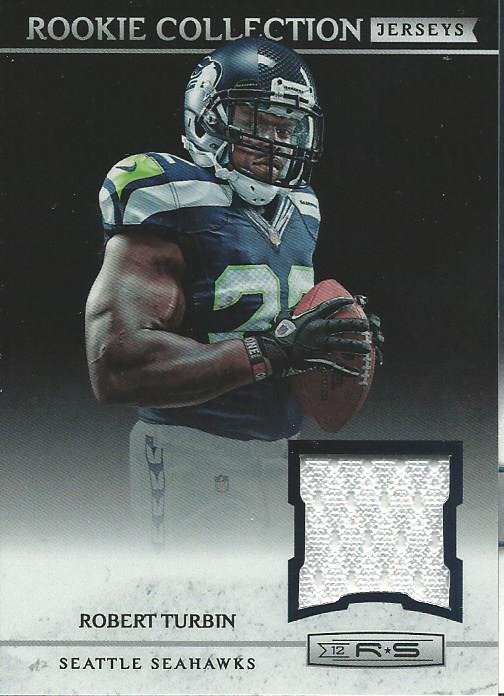 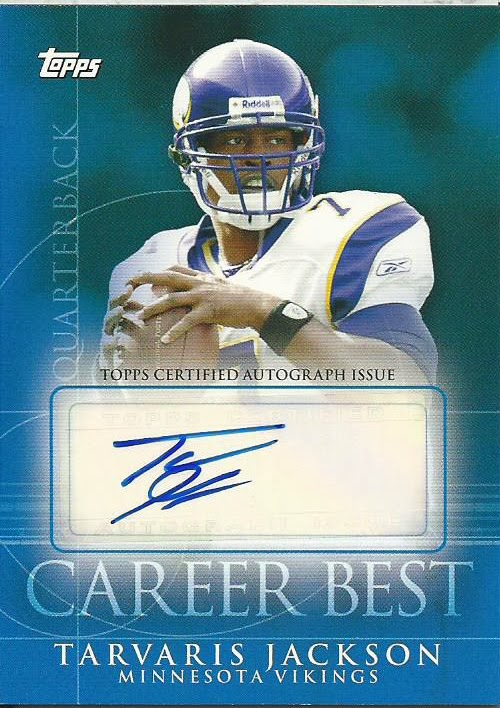 The final autograph is from Fuji himself. I saw this card a number a years ago on a blog when the blogger traded with Fuji. I have wanted one ever since, I like when bloggers create something unique and memorable that is connected to their blog. 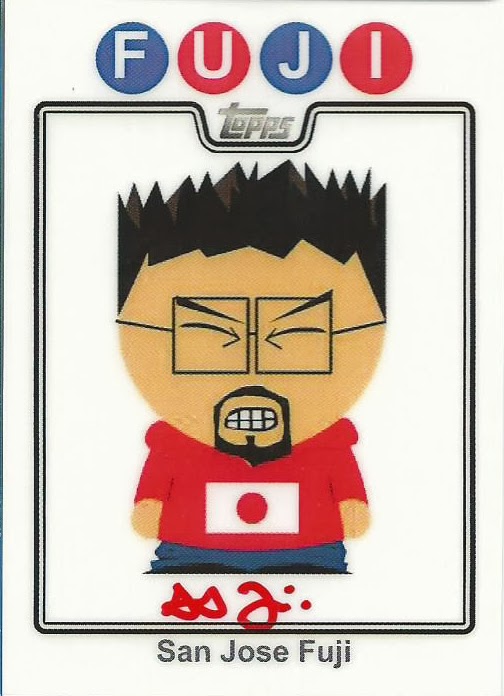