My most recent addition to my Mountain View Toros’ collection is Kurt Haws. Kurt graduated the year before I moved to Mesa but won a AAA State Football Championship during his time playing for the Toros and Coach Parker. After his Mormon mission he went to Utah and was drafted by the Washington Redskins in the Fourth Round of the 1994 NFL Draft. He was then drafted by the Carolina Panthers in the 1995 NFL Expansion Draft.

Even though he was in the NFL for a couple of seasons he doesn’t have any cards, so my only option was this 1994 Signature Rookies Tetrad autograph from when he was at Utah. 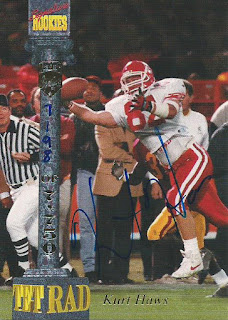