The Legend of Hal Chase 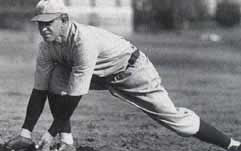 Hal Chase is probably one of the best defensive First Baseman ever to play professional baseball but yet he is not in the Hall of Fame. He played from 1905-1919 and spent most of that time with the NY Highlanders/Yankees (1905-13).

When compared with the Top 5 First Baseman (all in the HOF) you will see my point. All the numbers I use are based on when they played at First Base only:

His largest fault on the field was his ability to control the ball; he made a horrifying 402 Errors at First Base.

Now that his playing ability has been dissected you can see that based on those numbers, both offensively and defensively, he has a good argument for being in the Hall of Fame. What is the hold up you ask? He was banned from baseball for life in 1920 for allegedly bribing players and officials to blow games. He was a well-known gambler and it is believed that he may have been a go-between during the Black Sox Scandal.

After a solid career though with HOF numbers the collectors should appreciate him, maybe not for his off-field exploitations but for his playing career. His cards are unfortunately sitting on the bottom of the heap waiting their turn to be used as kindling. You can find a number of Hal Chase cards from 1908 through 1915, but his most common card(s) is the T206 cards, which there are 4 versions.