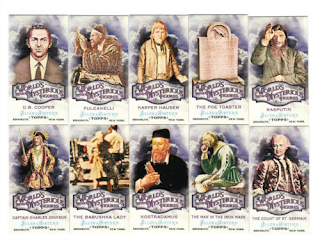 After writing about the Portraits of Penultimacy mini set yesterday I wanted to take a deeper look at the other inserts and mini sets that are part of this year’s Allen & Ginters release that draw my interest. With only a couple of rack packs opened I have not seen examples of all of the sets in hand so this will give me a better chance to review some of them.
The World’s Most Mysterious Figures is an awesome set built on some people that have probably become more fictional then real over the years but still a nice selection of mysterious characters. I like the colors Topps used here; I think it works well in this case.


D.B. Cooper - OK, first, the D.B. is a media creation; he purchased the airline ticket using the name Dan Cooper (believed to have been based on a French comic book hero). In 1971 the man hijacked a plane, demanded $200,000 and then parachuted out of the plane never to be heard from again. Some claim he died during the jump or shortly afterwards, a place card from the plane was found in 1978 and some of the cash was found in 1980 but nothing else has been tied to this crime. A couple of suspects have been named and a few people have stated they know who Cooper is/was but nothing has ever been proven.

Fulcanelli - He was a French alchemist; the name is believed not to be his real name, who claimed to have transmuted lead in to gold. Fulcanelli disappeared in 1926 but it has been claimed that he appeared in Paris in 1937 and again in Spain in 1953. I can say I knew nothing about this guy and had to search him out.

Kasper Hauser - In 1828 a teenage boy appeared in Nuremberg, Germany making some interesting claims. Over the next 5 years he was stabbed, shot and finally stabbed again and died from his wounds. It is believed that the kid was a pathological liar and injured himself in attempts to get attention. In 2002 DNA tests were done and it is possible (but not proven) that he may have actually been prince from the House of Baden.
The Poe Toaster - Since 1949 a mysterious person dressed in black wearing a hat and white scarf and walking with a cane enters the cemetery every January 19th (Poe’s birthdate) where Poe is buried and would leave a half-filled bottle of cognac and red roses. The toaster has not been seen since 2009 so many feel that the tradition was ended on the bicentennial of Poe’s birth.  It is believed, based upon a note left in the late 90s, this tradition was carried on by a father and then his son when the father passed away.
Grigori Rasputin - A Russian mystic, Rasputin was probably more insane then mystic but he had the power of persuasion and the Czar and especially Czarina fell for his “spoken truths”. In 1914 he was stabbed by a prostitute/friend in the stomach, it was such a horrendous wound that his intestines were actually pulled out but he survived. In 1916 he was poisoned with Cyanide then he was shot but got up to fight back, he was then shot 3 more times (including once in the forehead). When he did not die they beat him with clubs until unconscious, he was bound and rolled in to a rug and tossed in to an icy river. He was found three days later in the river and after an autopsy it was determined that he died not from the poison, not from being shot 4 times and not from the beating but he drowned after freeing himself and attempting to swim to the banks of the river. It is rumored that even after being buried and then dug up and taken out in to the woods to be burned he supposedly sat up when he was set on fire.
Captain Charles Johnson - In 1724 a book titled “A General History of the Robberies and Murders of the most notorious Pyrates” was published in Britain containing biographies and stories of pirates. It was authored by a Captain Charles Johnson. There has never been a record of a pirate named Charles Johnson nor was there naval officer with that name in the British Navy, it has since been attributed to writer Daniel Dafoe but not proven. I have to admit I am a pirate enthusiast so I am drawn to this card.
The Babushka Lady- In 1963 JFK was assassinated while visiting Dallas. Many people have seen the Zapruder Films showing the exact moment of impact (Back and to the left…) but there was an elderly lady that was taking pictures of the presidential procession from a different angle (one that would have shown the grassy knoll) but nobody could ever identify this lady and she has never come forward to turn over her photos.
Michel de Nostradamus- Probably the most well-known person on this checklist. He is known for his prophecies which depending on your interpretations can be seen as just fictional work or he could be the best “seer’ ever. I will leave it at that and if the end of the world comes I will just recant on my death bed (read this to mean I am skeptical).
The Man in the Iron Mask- The man, who has only ever been identified as Eustache Dauger, was imprisoned from 1669 until his death in 1703, he had only one jailer for that 34 year period and while others saw him nobody could identify him because he was always wearing a black velvet cloth mask, not iron as later claimed. It was not until 1771 when writer Voltaire claimed the prisoner wore an iron mask (68 years after Dauger’s death), in the 1840s Aleandre Dumas added to the story when he wrote about it during the Three Musketeer novels. Voltaire claimed the prisoner was actually Louis XIV older brother while Dumas claimed the prisoner was Louis XIV’s twin brother yet nothing has ever been proven.
The Count of St. Germain- The “Immortal” Count or just a liar? The Count has been described as being ageless, some even claiming that he was around to see Jesus change water in to wine but yet he never looked to be older than 40-years old. Another alchemist he supposedly discovered the secret to change lead in to gold, he was said to be a master jewelry maker, he spoke English, French, German, Spanish, Russian, Chinese, Greek, Latin and Arabic. He was also supposedly was an accomplished painter, master violinist, world traveler, he was richer than anyone else, he could create larger diamonds by pressing two diamonds together and could create his own “medicine” to cure aging.
A genius either way you look at it, he was probably just a charlatan and con man who was excellent at what he did.
I did not pull any of these cards from my rack packs but with sets running around $5-10 shipped I will probably look to pick up a complete set.