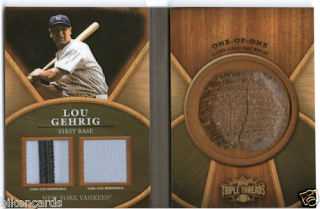 First I would like to thank Sooz from A Cardboard Problem for bringing this auction to light (courtesy of @JuddFamily Stone on Twitter) but it appears that once again Topps is giving collectors a middle finger followed up by a “Suck It!”
In the 2008 Topps Triple Threads release Topps included a fake Ruth/Gehrig autograph card: 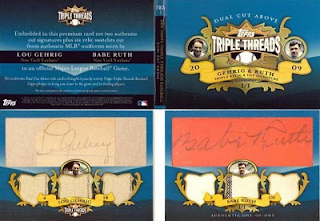 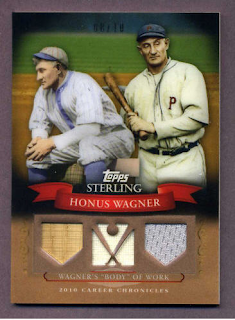 Now let’s fast forward about 10 months and take a look at this sweet Lou Gehrig 1/1 Bat Knob card (which would have been awesome on its own) but to make it even more awesomer (Is that even a word?) Topps adds in two game used relics including a pin stripe. How fucking cool is that?

Here is a close up of the game-used relics: 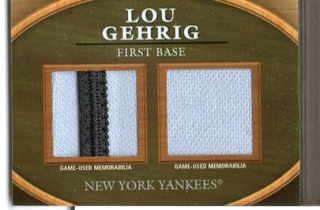 …Oh wait… aren’t those relics… um…polyester? Why yes they are…but didn’t polyester uniforms show up in the 1970s some 30+ years after Gehrig died? Why yes, you are correct again.
I expect to once again hear crickets coming from Topps corner when people start asking for an explanation. I do like the addition of “The Relics contained on this card are not from any specific game, event or season” as a way of CYA. Maybe they should consider adding in “Any specific player” to the list too to ensure complete coverage.

If this card is indeed real and pulled from a sealed pack from Topps there is a serious problem, especially considering that it has happened before. Some sort of verification needs to be ensured with autographs and memorabilia and I thought cards like this were hand packed which means that it should have been caught during manufacturing or at least during the pack out. Anyone that spends any amount of time producing sports cards can tell you the difference between a polyester jersey  and a wool flannel jersey.
Posted by Corky at 9/28/2011 11:14:00 PM