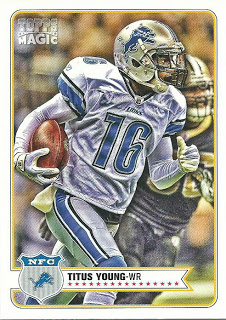 In February I pulled this card from a rack pack of 2012 Topps magic Football. At that time Young had already begun to show how stupidity and immaturity will always overshadow any type of talent. In a span of a year beginning in May 2012 he was suspended by the Lions a number of times, once for sucker punching a teammate, once for intentionally lining up in the wrong position during a game and then arguing with coaches, he was declared inactive for the Thanksgiving Day game and finally on December 5th he was placed on the IR and told by the Lions to stay away from the team’s facilities.

He responded by doing what has seemed to be more common when someone wants to complain, he turned to Twitter. There he stated his Hall of Fame credentials (is there a HOF for dumbasses?), demanded his release and spouted off about pay checks. The Lions released him on February 4th and the next day the St Louis Rams claimed him off of waivers but released him 10 days later.

What does he do next to draw in the interest from the teams looking for a semi-talented, loud mouth a-hole who will disrupt the locker room as much as T.O. or any New York Jets player? He gets arrested, not once but twice in one day, actually 15 hours if you are keeping notes.

He was arrested a little after midnight this past Sunday (5/4) for DUI, issued a citation and released on his own recognizances. Around 2 pm Sunday afternoon he was then arrested after climbing over the fence in to the tow yard where his car was impounded… you know… because going to the gate and paying your fee is not what a Hall of Famer would do. I am just wondering what his plan was when he got his car?

Is there any chance this kid gets another chance in the NFL?