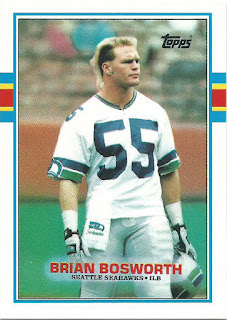 Brian Bosworth was one my favorite Seahawks but I never seriously collected, there never seemed to be much reason to because I only wanted the cards when he was with the Seahawks and he was in the league only two years before retiring with an injury. After he was drafted by the Seahawks I actually changed my jersey number to 55 in high school where I was a linebacker too. 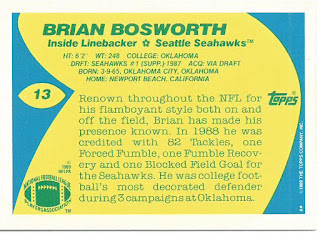 He had only four official cards from his playing days with the Seahawks; 1988 Topps (RC), 1989 Topps, 1989 Pro Set and 1989 Score. I have his ‘88 Topps rookie card and the 1989 cards are kind of gray whales where I will pick up eventually, but I did come across a 1989 Topps UK Bosworth that I added to my collection. It is nearly the same as the US version, but the back uses brighter blue and yellow and the card is number 13 on the checklist. At the same time, I found this 2016 Absolute Absolutely Ink autograph #/55 and I grabbed it. This is my first Boz autograph. 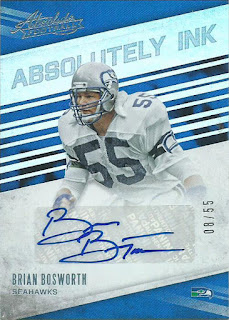