Todd spent 4 seasons with the San Francisco 49ers but because he was a linebacker, he didn’t appear in any major releases, so this 1986 McDonald’s Play & Win game card was my only option as far as I know. Mountain View opened in 1976 but because of the high school rules at the time a new school had to play two years of a non-varsity schedule before being playoff eligible, well Todd was on the 1978 team that went undefeated and won the Arizona AAA State Title the first year the team was eligible. He played college ball at BYU before being drafted by the 49ers in 1984 and was part of the Super Bowl XIX winning team.

This is another personal connection, as a football powerhouse team in Arizona we trained year-round and during the summer of 1989 Todd was my linebackers’ coach, so I worked one on one with him often. 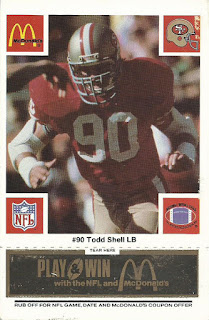