Again With The Production Errors? 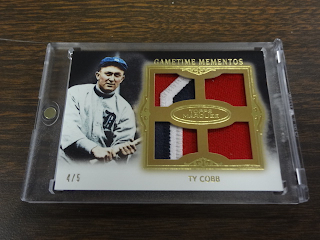 So while the world anxiously awaits Topps explanation for the “production error” with the Lou Gehrig Triple Threads polyester game-used jersey we now come across a similar case with a Ty Cobb Quad-patch from the recent 2011 Topps Marquee release. From what I have read on the FCB board it was supposed to be a quad-bat relic card but somehow another player’s patches made it in to this specific card (#4/5). Apparently Topps has requested that the card be returned to them and are offering the collector who pulled it a couple of boxes of cards in return.
I know it is just another error and that errors happen in card production, but as has been pointed out on a number of occasions when we are talking high-end cards in limited numbers you would expect these types of problems caught before pack-out and not after a collector pulls it.
Posted by Corky at 10/03/2011 02:35:00 AM