My Thoughts:
As a regular reader you will know that I am a MMA fan and up until a few years ago there have not been too many options to choose from and they were usually smaller, lesser known sets so I love to see major releases hit the shelves. We just saw the release of Topps Finest, next month brings us Topps Moment of Truth and now Topps has set the date for 2012 Knockout, a hobby-exclusive release.

Like most high-end products this one is geared towards hits and autographs but the base set seems to just be fluff. There are some pretty cool action shots but the design is just boring, Topps designers should have wet with a full-bleed action shot and name and called it good instead of adding in the color and textures. 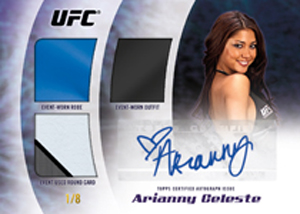 I think the Between Rounds Auto-Relic cards will probably go over well with collectors, the Octagon Girls get lots of love. Expect to see Arianny Celeste, Rachelle Leah, Chandella Powell and my favorite Brittney Palmer. 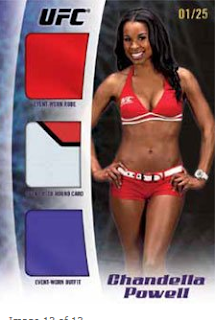 I like the addition of the Fist-ographs box toppers, on-card autographed fist marks from 10 different fighters but with only 10 fighters on the checklist and each card #/5 (meaning 50 total cards only) most people probably will not be pulling one from their box.

I do want to point out that the promo image that Topps has provided shows the card clearly marked "1/10" so either the information I have seen (stating 10 fighter checklist with each card #/5) is incorrect or this Stann fist-ograph card is a mockup. I will look in to this further and update if I can find out the specifics of the Fist-ograph checklist. 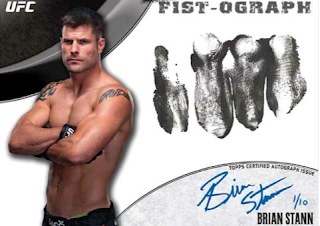 Sadly most people will drop almost $200 and probably not pull a box topper and they will get a box loaded with parallels that add no value and plain relics.

Another thing I want to bring up is that Topps still has not completed all redemptions for the 2010 Knockout autographs checklist, don’t you think they should put a little more effort in to completing one set before churning out another set that will be loaded with redemptions? Many MMA collectors feel burned with this redemption fiasco, paying out $175-200 for a box with redemptions that still are not filled 8 months later and now Topps is ready to begin the whole thing all over again?

Considering that the autographs are stickers, how about only create a checklist consisting of autographs you already have in hand before releasing the set? I may be going out on a limb but I bet there are fighters Topps plans to include on the 2012 auto checklist that never signed for their 2010 autographs.


Triple Threads booklet cards (Can you say hideous sayings all around?)