Now that the baseball regular season is over and the post-season has begun I decided to close out another Mariners losing season with a final baseball blaster box review. Again behind the times I grabbed up a couple of Topps Lineage boxes to review and I have to say I am satisfied with the product.

I like the mix of players that has been included; we see some vintage players like Wagner and Cobb, toss in some post-war players like Mantle and Jackie Robinson and finish up with modern players Ichiro and a sprinkling of youth like Pineda and Upton. The cards are all colorized, which makes for a cohesive set and the border works mostly, I don’t like the open right-hand it just feels unfinished though. Completing the cards are the logos for each player, with retired player’s logos being the actual logo from the team at the time. I pulled one Venezuelan card, a Derek Jeter. The cards are no different than the basic set card except for the back being in Spanish.

There is a plethora of parallels including Diamond and Platinum Diamond but the Stand Ups are one of my favorites, I pulled a Pujols and Jason Heyward, not a bad pair to get. I also pulled a Jackie Robinson Cloth Sticker, another interesting parallel. Unfortunately none of the 3D cards made it in to my box. 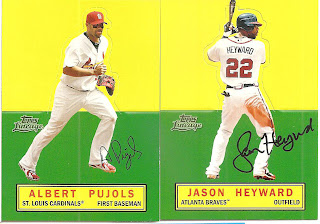 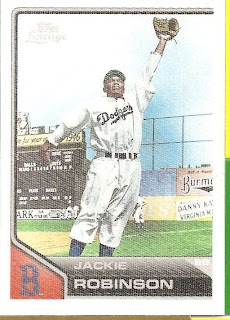 Closing out the blasters are the 1975 minis, a decent addition but I can understand how some people are getting tired of minis being put in almost every set, not to mention the whole retro being overdone things. I pulled 4 regular minis with Lou Gehrig being my highlight of almost the entire box, tying with the Robinson cloth sticker. Each blaster also included a 75 mini relic card, a Nelson Cruz (mhm) relic and a cool Joe Mauer relic that has some stitching along the left side. 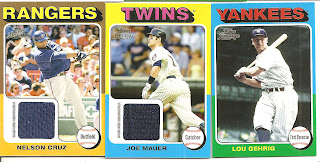