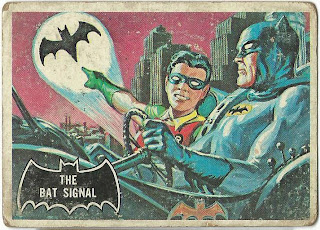 In January 2014 I picked up a 1966 Batman Red Bat buyback card (still not sure why) that had been inserted in to a pack of Topps 75th Anniversary. The card is cool but I am not a fan of the gold foil “Topps 75th” stamp, I got caught up in the bidding and paid more than I should have.


This time I decided to go straight to the original, no more buybacks for me. I like the 1966 Batman sets, there are actually three different 1966 Batman sets each with their own checklist. There is the Black Bat, the Red Bat (or A Series) and the Blue Bat (or B Series). The difference being the color of the bat on the front of the card that contains the card name. The Black Bat set has 55 cards on the checklist, the Red and Blue Bat sets each have 44-card checklist.

This card is from the Black Bat set, card #3, and I picked it because of the iconic Bat Signal. I don’t plan on working on the set but this card is really cool because everyone know the Bat Signal. The card is showing its age, that corners are rounded and there is wear on both the front and the back. The perfect example of a vintage card. 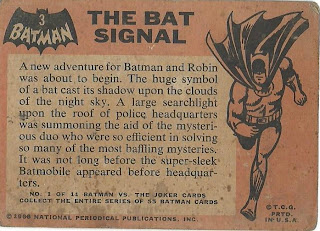