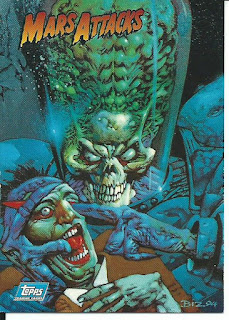 Two years ago I made the pledge to cut down on impulse card purchases and I have done a pretty good job with it too but occasionally I will come across something and still bid on it just because. The one thing that I have done well with is I keep my impulse purchases to cards of players/teams/sets I already collect to at least keep my collection focused.


A recent impulse buy deals with aliens. This is a 1994 Topps Mars Attacks promo card. In 1994 Topps decided to build on their Mars Attacks sets from the 1960s, this was two years before the release of the awesome Tim Burton Mars Attacks movie. I have always been a fan of the various Mars Attacks releases, and obviously the movie, and will grab various cards as I come across something I think is cool. This promo card was one of those cool finds. I have considered before but never paid it much attention but my urge finally kicked in and I picked one up. The reason I love this card is the gruesomeness, it is not a common sight to see a Martian poking their finger in to someone’s eye an action recently repeated by the Broncos' Aqib Talib.
Posted by Corky at 11/10/2015 11:51:00 PM