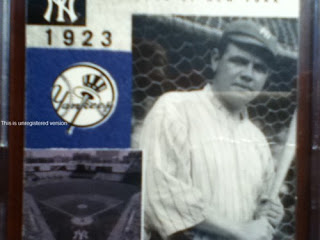 Sometimes while searching eBay you come across items that are being sold by someone who is either delusional or just plain trying to rip people off.

Today while searching for Lou Gehrig and Babe Ruth cards I came this listing for a 2001 Upper Deck Legends of New York Babe Ruth card supposedly containing “a piece of game worn hat REAL!” but the card pictured (which you see above) is a base card from the set. If you are not familiar with the 2001 Legends of New York release, Upper Deck created this set highlighting the teams of New York both past and present. It includes the Yankees, Mets, Brooklyn Dodgers and New York Giants. On the front of the card the team’s logo is made up of felt using the team’s colors. His card is even in pretty bad shape with multiple creases across the front. Most base cards from the set in mint condition sell for only a couple of bucks.

What leads me to believe that this guy is attempting to rip someone off is his claim that the card came with a Certificate of Authorization, which he mistakingly threw out when he got the card. This is a lie because Upper Deck marked the back of these cards as authentic, not on a separate certificate. 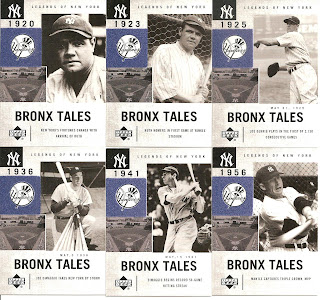 I opened a box of this product and was fortunate enough to get pretty close to an entire set plus I pulled a Dave Winfield bat card and a Joe Pepitone jersey card. As you can see the base cards look very different from the memorabilia cards and all of the base cards contain the same felt around the logo. I even have the same exact Ruth card #126 along with other Yankees cards. 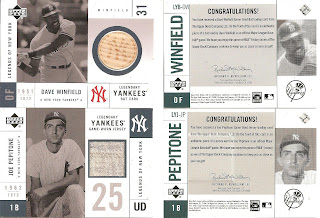 I did email him pointing out that his card is actually a base card and that you can find it for a couple of bucks. I guess we will see what becomes of this listing. Another situation of “Know what you are buying”