All That Is Left 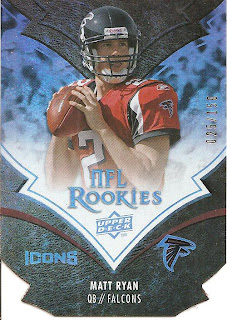 With the score sitting at 21-10 at halftime I felt an eerie feeling that with a couple of field goals the random sports cards would have been correct. While I was happy with the end results I felt that overall it was a bad game. The Steelers played poorly in the first half and the Packers played poorly in the second half. It was not a situation where the better team won as much as it was where both teams played badly and the team that played a little less poorly won.

Monday I was planning to cover the best of the rest where I went through the 16 packs again and pull the best of what was left. Sad to say there was not a whole lot of “best” cards left. A couple of the cards that I would list as “Among the best” include the Bart Star and Vince Lombardi UD Masterpiece cards, a UD Icons Tom Brady NFL Icons #/450 and a couple of decent rookies like a UD SP Darren McFadden rookie. The best card though is this UD Icons Matt Ryan Silver die-cut RC #/150. While I may not have pulled any amazing hits I had fun opening the packs, well worth the cost of the re-pack box so the Ryan RC is just icing on the cake.
Posted by Corky at 2/08/2011 04:42:00 PM

Labels: All That Is Left, Random Junk