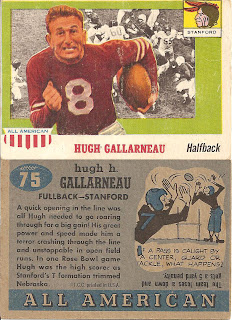 February’s Vintage Card of the Month turns out to be the epitome of a classic common card. Hugh Gallarneau was actually such a significant force for the Stanford Indians (now Cardinal) that along with teammates Frankie Albert, Pete Kmetovic and Norm Standlee, turned the team from a perennial looser to an undefeated team in 1940 and ended the season ranked #2 in the country. But that success did not carry over in to his pro years.

By the time the 1955 Topps All American set was release Gallarneau was done with football having gone on to have a mediocre career having played only 5 seasons for the Chicago Bears (interrupted by World War II) but he will best be remembered for his time as one of the WOW Boys at Stanford.

As you can see Topps was having QC issues even back in 1955, I would call this at least a 95/5 on centering and there are a number of creases but I enjoy the card none-the-less. This is a piece of history, one of the best football sets of the Century in my opinion. I actually picked up this card recently in a trade.

I love the trivia added to the back of the cards. Did you know that in 1955 if a pass is caught by an Offensive Lineman the team is penalized a down and 5 yards. I had to look in to this one but the penalty now is either a loss of down (if the Defense refuses the penalty) or loss of 5 yards (if accepted).
Posted by Corky at 2/25/2011 11:58:00 PM