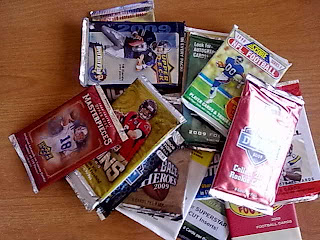 With just about an hour left before the Super Bowl everyone is trying to get their final predictions as to who will win the big game. Personally, even though I hate the Steelers I still think they will come out victorious. I see that Las Vegas does have the Packers as a 2 ½ point favorite with the Over/Under set at 45 total points scored.

But as I was finishing up my last minute game day food shopping I noticed a stack of re-pack boxes sitting with the other impulse items on the shelf. There was a stack of baseball and a stack of football boxes and what caught my eye was the “Championship Collection” logo on the box. Was this a sign? Can we rely on the fortune telling of 16 random packs of football cards to pick the winner of the Super Bowl? Why not, sounds as logical as some of the other ways that people pick a winner.

So with 16 packs of football cards ranging from 1990 through 2009 I figured I would try to come up with a guess as to who will win and what the final score will be based on what Packer and Steelers cards I end up pulling.

Here is the scoring system I will use:

Safety (2 pts)- For any rookie from the Packers or Steelers 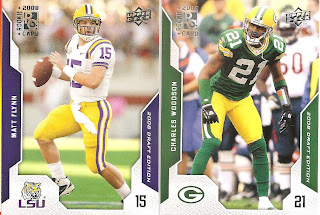 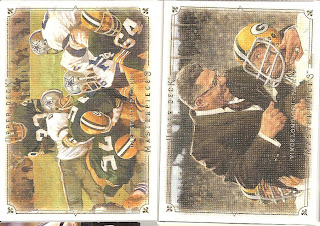 You read that right, the Green Bay Packers are going to overcome an early deficit to beat the Pittsburgh Steelers.
Posted by Corky at 2/06/2011 04:17:00 PM