The Future Of Teddy Bridgewater In Question 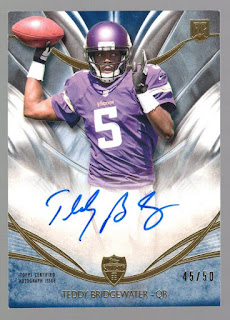 There was a point that Teddy Bridgewater was the future of the Minnesota Vikings franchise and based on his first two season he was progressing. Taking in consideration his youth, athletic ability and game managing skills and Viking fans had a lot to cheer about but all that changed when he destroyed his knee during practice this past August. The Vikings made a trade for Sam Bradford, and behind a solid line Bradford is flourishing and the Vikes are an unexpected 5-1 and leading the NFC North.
It has now been a little over two months since Bridgewater’s injury and rumor out of NFL insiders is that he is lucky to be walking and will most likely never play another game again. It is sad to see a young talent like Bridgewater done after two seasons because of a complete freak practice injury. It is a sign that no matter how young or talented someone can be their career can be over in a moment. His cards are still selling pretty well showing that there are collectors who still have faith that he will return to the field.