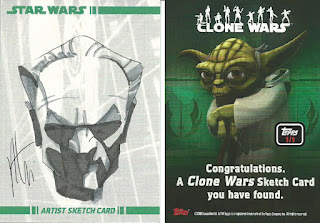 This month’s Art Gallery display comes from artist Robert Teranishi who has worked for Image, Dark Horse and WildStorm Comics as well as Marvel and DC. In the card world he has worked almost exclusively with Topps in their Star Wars and Mars Attacks releases. He is best known for his pencil and ink drawings working mainly in black with the occasional red. This specific card is from the 2008 Topps Star Wars Clone Wars release.

I am a huge fan of using negative space and shadows to create a design, it forces the brain to work differently to create the complete image in your mind. The subject of this card is Sheev Palpatine who eventually becomes Emperor Palpatine and ultimately Darth Sidious, the Sith Master to the Sith Apprentice Anakin Skywalker/Darth Vader.