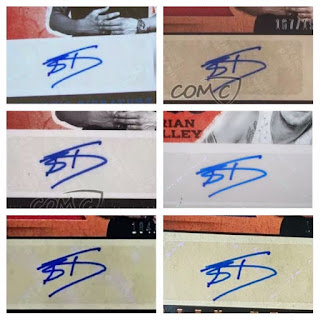 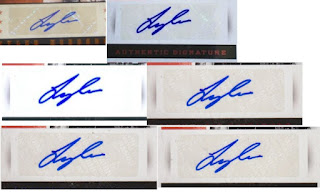 The use of an autopen is not Panini’s fault, that is on the athlete/personality that are signing the cards and stickers, but what is on Panini is that on more than one occasion these autographs have passed through people’s hands and nobody did anything about it. One or two autopen autographs can understandable slip through without being noticed but in the case of Kelly and Hubbard we are talking sheets of perfectly signed autographs that are on the same location of every sticker and signed with the same pressure, same start and stop location, same little swoop and loops and same angle every time. This is a situation of seeing and not caring, a QA issue.

At this point collectors are just looking for any autograph sequence that may look similar as a way to nail Panini, though this isn’t only a Panini problem, this a Panini only problem right now.
Posted by Corky at 7/06/2017 03:19:00 PM