Let’s look at the Topps Now cards that Topps made to immortalize the 2017 All-Star Game:

Card #348
In the 6th inning Yadier Molina homered to tie the score 1-1 becoming the oldest catcher to ever knock a homerun in an All-Star Game. Yes, seems like a logical choice. 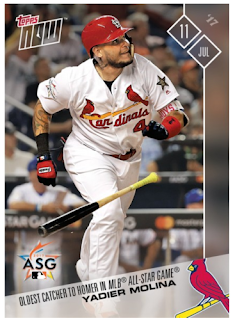 Card #349
In the 10th inning Robinson Cano homered to give the AL the go-ahead run which turned out to be the winning score. Also Cano won the ASG MVP Award. Yes, definitely a good choice for a Topps Now card. 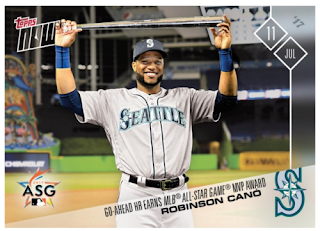 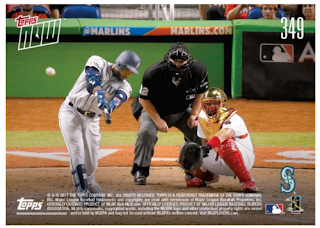 Topps decided to make three cards representing the highlights of the All-Star Game so surely the third card has to be amazing. Maybe Andrew Miller closing down the game to earn the save? How about Miguel Sano’s single in the 5th inning to start the scoring? Max Scherzer striking out Aaron Judge? Maybe a card about the AL winning the last 5 ASG?

Topps decides to create a card from the least baseball related thing to happen during the game, a fucking hair flip. Yes, they decided to go the shampoo commercial route and highlight Bryce Harper and his “EPIC” (their word, not mine) hair flip. That the word "Epic Hair Flip" is on a card is ludicrous let alone using a picture of Harper flipping his hair like he is stepping out from beneath a cascading waterfall. 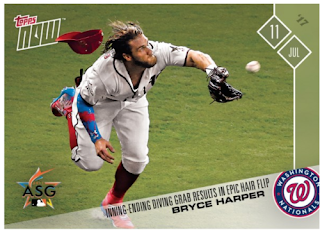 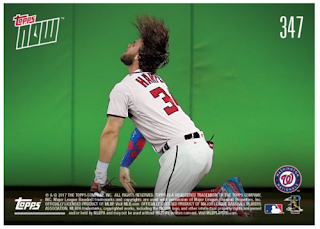 Yes I realize the card will sell, quite well I am assuming, and will probably sell higher on the secondary market than the other two cards.
Posted by Corky at 7/13/2017 11:00:00 AM