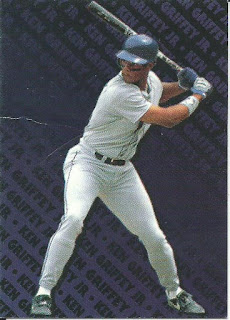 While I hit 1,300 unique Griffey cards a card that came in just prior is one that I am focusing on today. The card, #1,298 in the collection, came from a seller in the Seattle area in less than stellar condition. The card came in badly damaged, which was not the seller’s fault but from the post office. When I received the mailer it had a large oily circle that was roughly the size of a soda can smashed on to the middle of the padded mailer. I am guessing it was caused by some sort of machinery and even though the card was secured inside a rigid top loader it took some nasty damage to the top loader, penny sleeve and card.

The card has a circle stamped in to it that runs from Griffey’s waist and down his right leg and to add insult the card is creased above the circular mark. Ouch ouch ouch.  I contacted the seller to let her know how I received that card and I told her it was obviously damage by the post office and not her and that I was going to leave positive feedback, she immediately offered a refund and told me to keep the card. She even told me to look through her auctions and choose any card in the same value range and she would send that to me which I politely refused because I felt bad that not only was she out the Griffey card but the money too and I didn't feel right taking another card from her.

But while we were going back and forth I told her I used to live in the area and it turns out her and her husband used to run a card shop that I frequented in my town. It was totally random and had the card not been damaged I wouldn’t have contacted her and reconnected with an old dealer. Sadly, she closed the shop a year after I moved because her husband passed away but she is still selling cards through eBay. 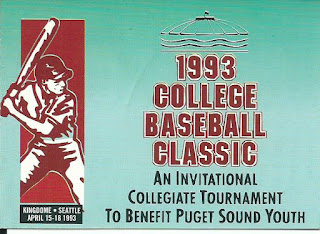