A Couple More For My Nick Foles Collection 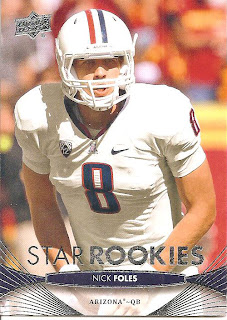 I picked up a couple of packs of Upper Deck football the other day and was quite happy to pull a Nick Foles Star Rookies. I am not a fan of the Eagles but I am cheering on Foles. He is actually sitting at the #2 QB position behind Vick right now so he will see some time through the pre-season and get some playing time during blowouts/mop up games. 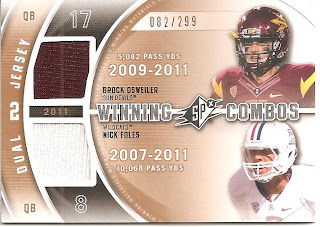 The second card is from the 2012 SPx Football release, a Winning Combo dual-jersey card of University of Arizona’s Nick Foles and ASU’s Brock Osweiler. Normally I would never ever purchase anything connected to the Sun Devils, I did make an exception in this case based on the pure joy that Osweiler will be immortalized on a dual-jersey with Nick Foles, the same Nick Foles who ended Osweiler’s college career with another loss to Arizona and for a couple of bucks it is worth it.

There are four Winning relics insert sets and each has parallel versions.
The Winning Big Materials contain a single player jersey relic #/199, a patch relic version #/10 and an autographed version #/5.


The Winning Quads contain four player’s jersey relics and are numbered to #/75 (base) and #/5 (patch).

There is a downside to these cards, they are not game-used, and the back states “The jerseys were worn by the athletes for Upper Deck”. I guess this is at least better than Topps’ “This item is not connected to any specific athlete…” claim on the back of some of their relic cards.
Posted by Corky at 8/16/2012 10:24:00 PM