Leave It To Upper Deck To Have Some Fun 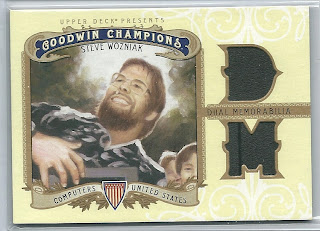 There have been some interesting relics included in cards over the past decade like shoes, hats, gloves and even a corked bat (Thank you Pacific, you may be gone but we will always love you) but now we can include a flpppy disc in that checklist. Upper Deck inserted a Steve Wozniak relic and dual-relic cards in the Goodwin Champions release that includes pieces from floppy discs. There are both red and black discs with some of the dual-relic cards containing one of each color. The dual-relic cards do not appeal to me, I prefer the vertical style that is used on the base card and single relic cards. 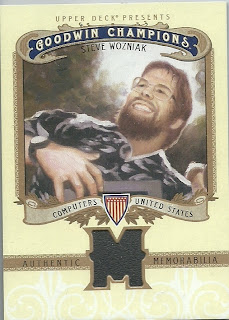 Surprisingly most of the single relic cards can be picked up for a couple of bucks with the dual-relic cards hitting the $15-20 range. If Upper Deck were to have included Steve Jobs version I would bet the price would be sky high right now instead of a few dollars. I know this is kind of a gimmick but no worse than Topps and the Gypsy Queen's jewel relics and Gypsy King's bat relics. 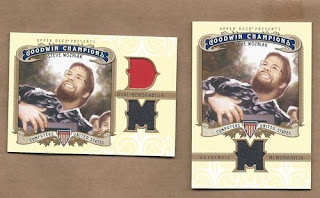