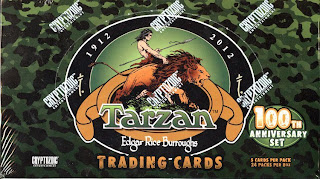 In October 1912 Edgar Rice Burroughs released Tarzan to the public in the pulp magazine All-Story Magazine. The success of this short story led to Burroughs releasing his first Tarzan novel two years later. Since then there have been 24 novels, 8 movies (including Disney’s 1999 version), numerous comic books/graphic novels and weekly comic strips.


Cryptozoic Entertainment has worked with Edgar Rice Burroughs, Inc. to complete the Tarzan 100th Anniversary set that was released last Friday. The set consists of a 54 card base set featuring cover artwork of Tarzan comics, there are foil parallels and printing plates of each base card, plus two 9-card chase sets; one featuring artwork from Burroughs’s novels and the other featuring Tarzan movie posters. Each box will also contain a 1/1 sketch card from a variety of artists. Lucky collectors can also find special redemption cards that will award the redeemer with cut signatures autographs or original artwork. 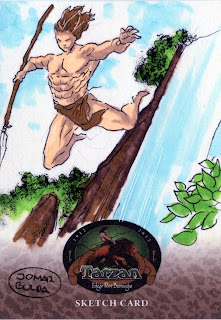 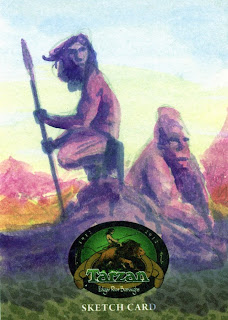 Each $70 box contains 24 packs, 5 cards per pack, and 1 sketch card. There are no specific odds for the subsets and inserts besides the 1-per-box sketch card. This is truly a set designed for the Tarzan enthusiast.