Is Jeff Demps Worth A Contract? 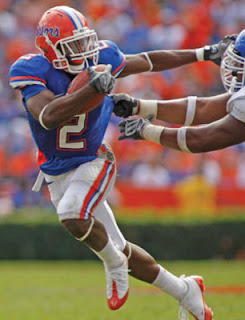 Former Florida Gator’s running back Jeff Demps is looking to sign on with an NFL team, and has even seen some interest from the Buccaneers and Eagles. His stats at Florida, while not mind blowing, are reasonable. He averaged 617 rushing yards plus another 120 yards receiving a year and he did time at Punt Returner and Kick Returner. He may be undersized at 5’7” and 190 lbs. but I have two words for you (No… not “Suck It!”… Damn I miss DX sometimes) but I was thinking more along the lines of Percy Harvin. Yes, Harvin has a couple of inches on Demps but you get the idea of how he could fit in to a coach’s plan.

What I find surprising is how there are quite a few reporters and analysts that are calling this a joke. Sure he has taken time off to work on his Olympic training, where he helped win the Silver medal in the 4x100 relay in London, and he missed out being drafted because he stated that he planned on focusing on track leading up to the Olympics but claiming his training would stunt his football skills is just ludacris. There have been a number of Olympiads who went on to play in the NFL successfully. Michael Bates, an old elementary school friend from Tucson (Go Cragin Cougars!), was drafted by the Seahawks in 1992 but took off the summer for the 1992 Barcelona Olympics where he won the Bronze in the 200 yard dash and while I would not say he had a great career he had a successful career as a kick returner, he played 10 years (6 teams) and was a Pro Bowler 5 times, made the All-Pro Team 5 times and was selected to the 1990s All-Decade team.

I think that Demps may have a similar path to Bates, he is close in size (5-7 to 5-10 and 190-215) so I would expect to see him probably come in as a kick/punt returner mainly and possibly lining up as a receiver or slot back on occasion. I do not see why a team would have a problem with brining him in now, sign him and give him a chance. He can be signed for the rookie minimum and what is the worst that can happen? If he stinks cut him loose during the roster cuts and if he succeeds you have a player worth his salary (something that seems very rare in the NFL today).