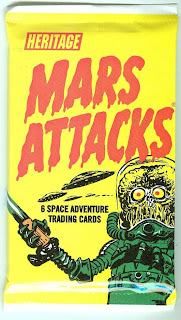 Normally I do not get involved with “Hot” packs, I have heard some horror stories and depending on the product you can almost guarantee that the pack has been opened and resealed but when I came across an auction for a 2012 Heritage Mars Attacks! pack that was guaranteed to include a sketch card for a dollar I figured I would toss my hat in to the ring. The 2012 Topps Heritage Mars Attacks! series is a 50th Anniversary tribute set based on the original 1962 Topps Mars Attacks! release.

I always got a kick out of anything that involves Mars and aliens. I can almost guarantee that I was the only kid in my neighborhood to have a cassette tape with Orson Welles War of the World original broadcast, I have seen every adaptation spawned from Welles work too. I am standing here today to acknowledge openly that I am a Martian addict. I will even begin my 12-step program by admitting that not only did I see the 1996 Mars Attacks! movie but that I loved it and own a copy on VHS and DVD… I may now hang my head in shame.

So, now with the back story out of the way I can get on to the reason we are here today.

So, I came across a hot pack with a guaranteed sketch card in the pack, they actually come one per box (24 packs per box) so it is not really a huge thing to find one but it was sitting at 99 cents and 2 days left so I tossed up a bid for $2.01 and figured the countdown would come soon enough. Packs run $2.08 at Target so my bid was well within reason and hell, if I know I am getting a sketch card why not pay the pack price right?

Then apparently stupidity took over and my bid was blown away, not like a simple little increase but blown away as if the Miami Heat played the local Jr High basketball team type of blown away. After a flurry of bidding the winner walked away paying a hefty $20 for the pack. Considering that a sealed box only runs about $45, which includes 24 packs and one sketch card, why would anyone pay that much for a single pack?

I have picked up a couple of packs and will most likely end up buying a Hobby box to break, I will post something up shortly about my first impressions hands-on.

I just want to end this with some pure Martian awsomness. This is one of Joe Simko's sketch cards, he has worked with Topps for a number of years with his work appearing in Garbage Pail Kids and Wacky Packages and his most recent work is with a company called Wax Eye in their Cereal Killers stickers. 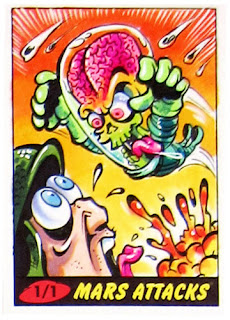