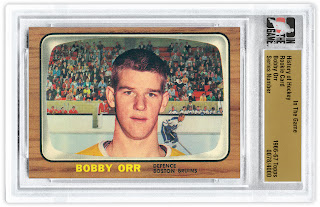 In The Game is known for their hockey sets, unfortunately they do not have an NHL license, but that has never stopped them from putting out some quality releases. The newest product on the horizon is the History of Hockey release. So far no release date or price information has been announced. The product will be limited to 4,000 total packs.

Each pack/box will contain 4 cards: 1 Greatest Moments in Hockey, 1 Rookie card, 1 Autograph card and 1 Buy-Back card. The Greatest Moment cards are all hand painted original-art cards created for the set while the other 3 subsets are buy-back cards and encased as part of this set. The cards will include labels that are color coded to distinguish each category, the Greatest Moments have a silver label, the Rookie cards have a gold label, the Autographs have a white PSA/DNA label and the Buy-Backs have a green label.

Greatest Moments in Hockey:
This 145-card set will include some of the greatest moments in hockey like Wayne Gretzky’s 802nd goal, the 1980 US Miracle on Ice and Martin Brodeur’s All-Time Wins Record. Each card in the set is hand-painted and limited, the first 60 cards in the checklist will be limited to #/10 (1 Gold version and 9 Silvers) and the remaining 85 will be limited to #/40 (10 Gold versions and 30 Silver versions). 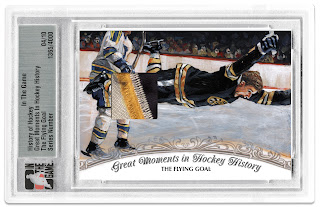 Jared Kelly and Mike James both have artwork included in the set. The preview image that ITG released of Bobby Orr’s flying goal is one of the two cards that Jared has included in the Greatest Moments checklist. Jared included a "Before" image of the Orr card on his website showing what the card looked like before the relic was added. 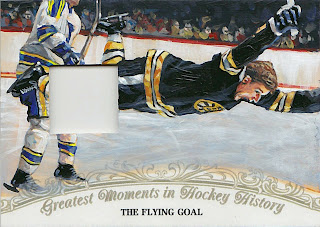 Rookie cards:
ITG went out and found rookie cards of some of the greatest players ever, which they encased to protect, and included one in each pack. There are some amazing pulls here including:
1911 C55 Georges Vezina
1951-52 Parkhurst Rocket Richard
51-52 Parkie Gordie Howe
66-67 Topps Bobby Orr
2005-06 Upper Deck Young Guns Sidney Crosby 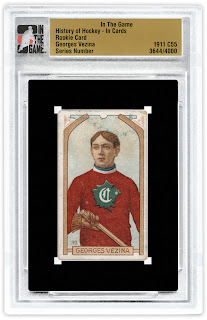 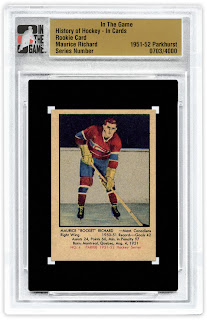 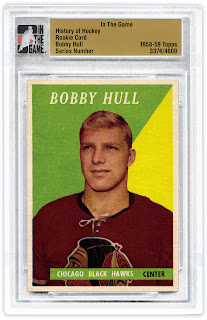 Autograph cards:
ITG bought a number of cards from various players (not sure if they purchased them already signed or had the players sign them) and then had the autographs authenticated and encased by PSA/DNA. 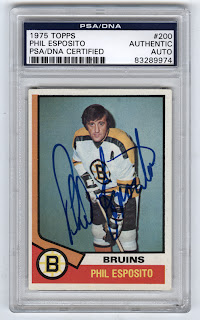 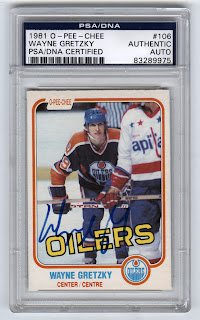 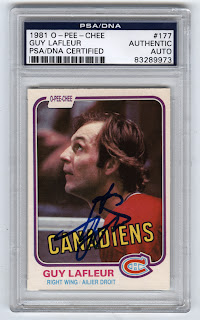 Buy-Backs:
ITG went out and bought 4,000 cards dating back to when they opened their doors in 1998, half of the 4,000 cards are autographs and the other half are memorabilia cards. The cards were encased and marked as part of the History of Hockey set. 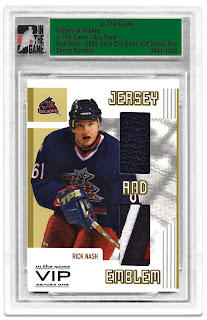 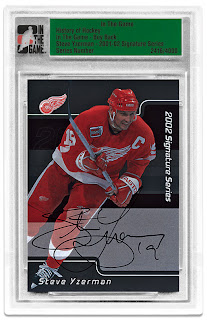 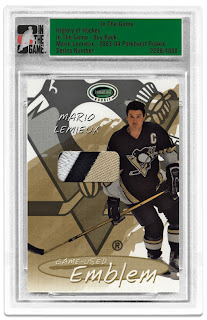 Personally I would probably end up busting some of these cards out of their cases, I know that they protect the cards but if I have pull the 1911 C55 Vezina card I would have to consider selling it, which would probably sell better being graded. Most of the rookie cards would fall in to this category for me.
Posted by Corky at 8/09/2012 07:58:00 PM