A Tale About A Jersey 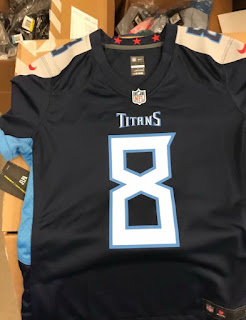 Controversy hit the Tennessee Titans when someone leaked a photo of the Titans’ new jerseys, which were not supposed to be unveiled until a party tomorrow night in Nashville. It may not seem like a huge issue, but the NFL is investigating, and someone will be fired. ESPN was told that the NFL thinks that the photo came from an apparel employee, so I don’t know it they mean Nike or another manufacture involved in the new design and creation of the uniform.
Posted by Corky at 4/03/2018 03:06:00 PM