Goldust Kissed A Card And He Liked It 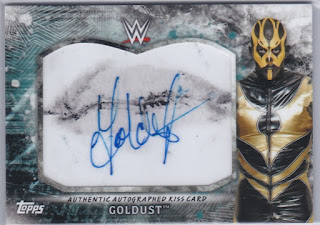 The Goldust kiss cards from 2018 Topps WWE Road to Wrestlemania are selling for quite a bit more than I was expecting. Since the sets release in January there have been 9 completed sales, there is one with a $149 BIN and another up for auction.

Since they first hit eBay in January almost every card has topped $100 except for one that sold at $66.37 on January 31st. I am a bit disappointed, the black used on his lips did not come out as well as the pink/red colors that are used for female kiss cards. With that being said, I would be overjoyed if I pulled one from a pack.
Posted by Corky at 4/10/2018 03:40:00 PM