In June Panini will be releasing the second incarnation of Golden Age Baseball. In short, the set looks better than last year’s gold and sepia release. The designs are better and the gold coloring is gone, two of my biggest problems with last year’s release.
A box will run $65 and contain 24 6-card packs; you will pull one on-card autograph and one Museum Age Memorabilia card plus 14 inserts and a Headline News box topper. This year they are bringing 1933 Delong Gum cards in to the mix and the Three Stooges are back for a nine card insert set.
I have to admit, the reason I decided to look more in to this year’s set is this guy… 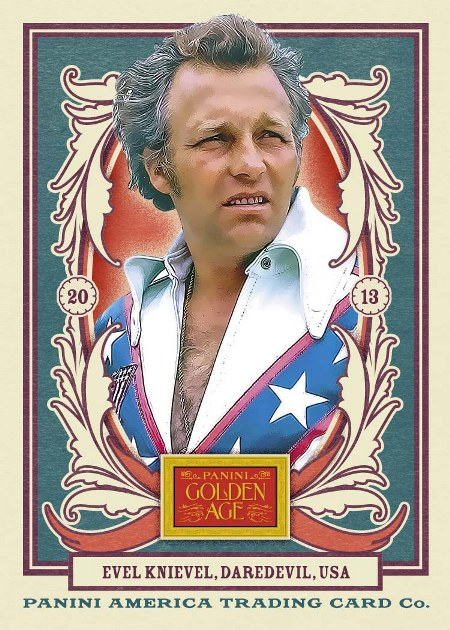 I grew up in the 70s, this guy was legendary and the Evel Knievel Stunt Cycle was one of the coolest toys any kid could own at that time. I just pulled up a commercial for the cycle on YouTube, just hearing the sound of the wheel winding up as the handle turned brings me back to when I got a Stunt Cycle for Christmas.
Panini and Famous Fabrics have included Knievel in recent sets and he still draws some big numbers even though it has been 6 years since he passed away. I plan to chase after some singles after Golden Age Baseball is released, with Evel Knievel at the top of my list.