Not That It Matters... 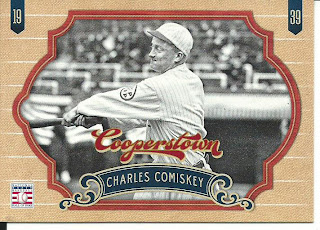 Charles Comiskey is best known as the owner of the Chicago White Sox since the team’s inception as a major league team in 1901, though Comiskey actually owned the minor league team that became the White Sox since 1894 when they were known as the Sioux City Cornhuskers, but he actually began as a player with the St Louis Browns in 1882. He played 13 seasons with the Browns, Chicago Pirates (1 year and done team) and the Cincinnati Reds. He was also a player-manager for his entire career, ending with an 840-541 manager record.
So what brings me to talking about Charles Comiskey today?
Well, I am glad that you asked.
I recently grabbed a pack of 2012 Panini Cooperstown Baseball to get a hands-on look at the product, not impressed, but something caught my eye. As I flipped through my pack and came across Card #21, Charles Comiskey, I was surprised by the player’s picture on the card front. This is a modern picture (desaturated) of a player or actor in a throwback uniform. The uniform is not only wrong for the teams that Comiskey played for but it is not even from the proper era.
Comiskey played most of his career with the St Louis Brown Stockings/Browns. He actually has a couple of cards from the era with the 1887 Allen & Ginters and 1887 Goodwin Champions being the most commonly chased cards. As you can see from the cards, one illustration and one photograph, the player on the Panini card is not in a Browns uniform. 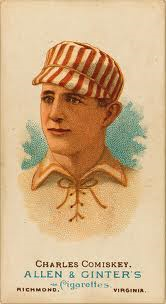 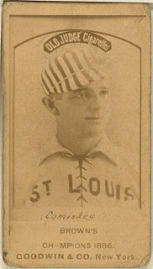 I was unable to find any images related to the Chicago Pirates of 1890, no uniforms, logos, cards, illustrations, nothing at all but I did find that the colors were blue and yellow.
His finally three seasons were in Cincinnati, until 1899 the Reds wore a white jersey with a stylized “C” on the chest. So again, obviously not the uniform being worn on the Panini card. 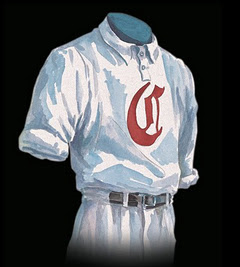 It is not really a huge issue, and besides satisfying my OCD I am not sure why I am writing such a lengthy post about it. I guess what bothers me is that Panini knowingly selected an incorrect image while they used correct images for other players from the era like Willie Keeler and Connie Mack.
Posted by Corky at 3/07/2013 10:50:00 PM