I don’t think I have opened any basketball packs recently so over the past couple of weeks I grabbed two blaster boxes, Panini Absolute and Panini Threads, along with a couple of packs of Panini Prizm.
I will start with the Prizm packs. I actually like the product, it reminds me of Finest. The fronts are chromed, the backs are semi-glossed and there is even the “Finest bend” to the cards. One things stands out, the edges of the cards appear to have a dimpled texture but the cards are actually smooth. When you look close the cards actually look like silver chrome basketballs with the seams of the ball in the background and the textured edges. I got a kick out of that one.
Panini got some players in their new uniforms (sort of), like Joe Johnson with the Nets. A nice selection of rookies, current stars and retired stars makes up the checklist. The rookies do not have a “RC” logo or any other rookie notation. I pulled Kim English, a non-entity for the Pistons, and Meyers Leonard, an even bigger non-entity for the Trail Blazers which is made worse by the idea that he was the #11 pick last year.

Panini Threads is up next, I like the Threads set because it is just a simple base set. The cards show action shots and keep things tight on the players. Because this is an early season set players who changed teams are not shown in their new uniforms, such is the case of OJ Mayo. I start with two solid stars in Rose and Love (if he can stay healthy) and an up and comer in Mayo. I have liked this guy since the start but he was starting to diminish in Memphis, a change of scenery and now he has progressed across the board, a resurgence of sorts.

A Wade red retail parallel, not huge but a good player though his personal life has suffered some setbacks as of late. Close out with an Al Jefferson Inside Presence insert. 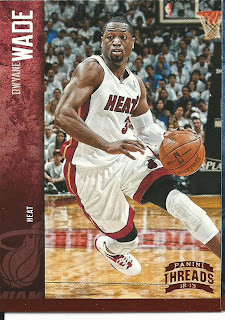 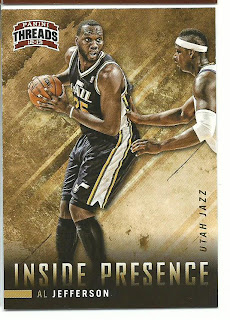 The final blaster, Absolute, is similar in idea to other base Panini sets. The focus is on the player over a foil background. The downside to foil is that the card faces get smudged and scratched easily. I started out with some good pulls, like Mayo I have been big on Curry too and this year he is tearing it up. After he was drafted in 2009 I had written a post going over some possible NBA trades and he was my main point in a possible Stoudamire to Golden State trade. I think Curry playing behind Nash would have been the perfect Master-Padawan relationship.

It is nice to see players in their new uniforms, even though all Howard seems to have done in LA is irritate a new team with his same old shit. How many more teams is he going to go through before he matures? Harden has really proved his worth in Houston. 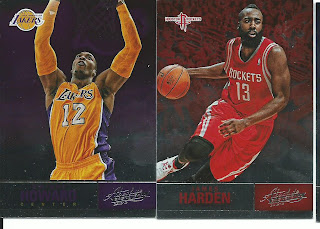 A couple of Suns including local boy, and University of Arizona product, Channing Frye (who is out for the season with an enlarged heart). There is not a whole lot positive coming out of this season for the Suns except for a Lottery Pick and possibly a second First Round pick from the Lakers in the Nash trade. I close with a couple of All-Stars, Larry Bird and Yao Ming (not pictured). 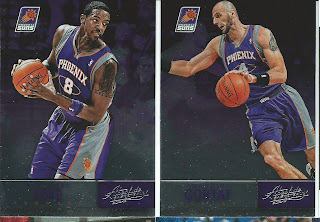 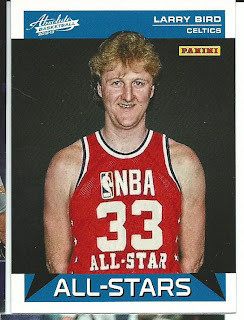 All three were fun to open, I love having a variety when I open packs it just makes the ripping that much more fun. All three are decent products but I do not expect to really buy additional Threads or Absolute but I do dig the Prizm cards so I may grab some additional packs as I come across them.
Posted by Corky at 3/06/2013 10:32:00 PM