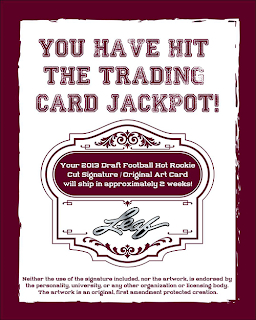 On February 24th Brian Gray made an announcement on Leaf’s Facebook page stating that the Mystery Redemption card in 2013 Metal Draft Football and 2013 Valiant Football is going to be big, a week later they began the teasing again when they posted about the upcoming announcement. Sure enough on March 6th the announcement came, the Mystery Redemption can be exchanged for a Johnny Manziel original art/cut signature card. The cards began shipping the next day and are now beginning to show up on eBay. 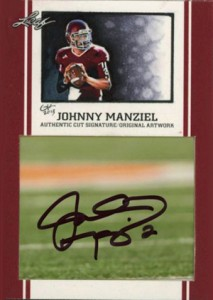 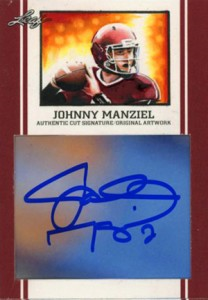 The cards are all original artwork from a sketch artist and the autographs are all cut signatures purchased from outside sellers who are not connected to Manziel. This is an interesting route because Manziel, his family or anyone from Texas A&M were not contacted or involved with the creation of the cards. I know there will be some people who find this questionable, which it is a loop hole but perfectly legal based on the NCAA’s rules, but it obviously has not affected the collectibility considering the auctions are running $800 and up. What is interesting is that there are a couple of Mystery Redemption cards up for auction and they are running $100 or more lower than the actual cards, I wonder if the difference is due to the fact that with the redemption card you do not know which sketch you will get where to purchase the card you see for sale then you know what you will get.
The final cards are authenticated by PSA/DNA and slabbed by Beckett. Here is a card currently up for auction on eBay to show what the cards look like when they are shipped. 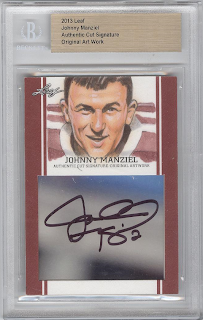 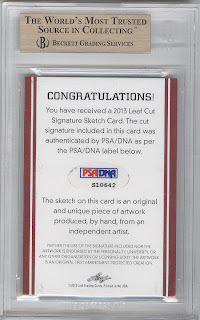