I picked up a couple of blaster boxes of 2013 Topps baseball to open, originally I had planned on just getting one blaster for a hands on review but after I bought my first blaster I decided to grab two more for fun. 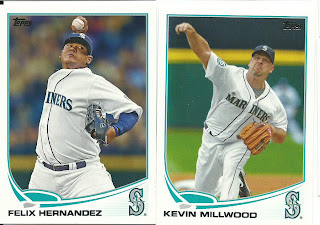 I never seem to have much luck when it comes to Mariners and Diamondbacks; the two teams I collect just are not usually represented very well due to the lack of collectability besides a handful of players. I ended up pulling only 3 Mariners and 5 Diamondbacks counting base cards and Blue parallels and 6 of the players are pitchers. 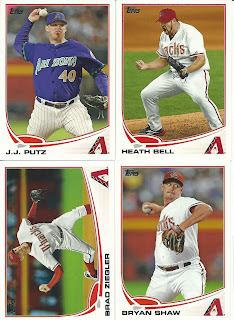 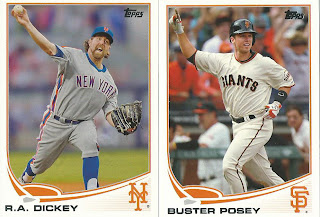 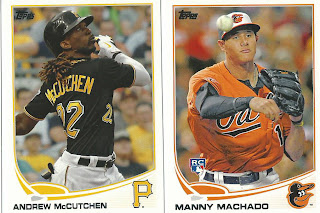 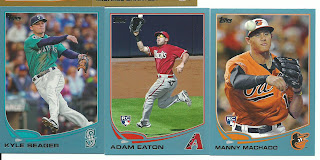 I pulled 5 Emerald parallels, 1:6 packs. Along with these three I also pulled Javier Lopez and Colby Lewis. 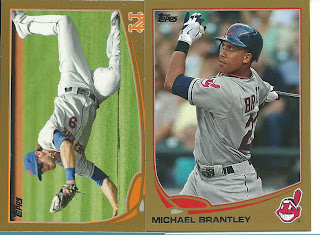 The 72 Topps release sure was an ugly ass set, and that is coming from someone who is building the 1972 Topps set (my birth year). I pulled 3 per blaster box, so 9 minis total. 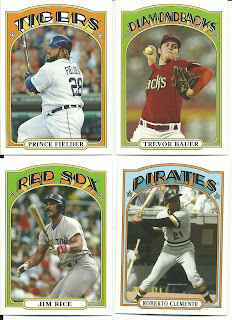 The Chasing History inserts cover players (past and present) who have hit a significant accomplishment, with Babe Ruth leading the way. Along with these 3 cards I pulled a McCovy 500 Home Runs, Spahn Wins By Left-Hander cards and Ian Kinsler 6-Hit Cycle cards.

Chasing The Dream inserts are focusing on young players who have potential. I pulled 5 total with Harper and Trout being the best, the rest are Matt Moore, Casey Kelly and Drew Pomeranz. 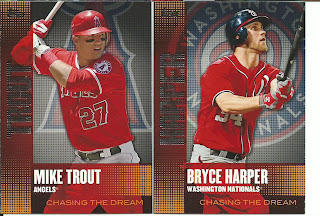 The Calling Card insert covers something special about the player, Sabathia’s card talks about how he wears two different socks when pitching, Dickey’s card is about his knuckleball and Pujols card explains why he points to the sky after home runs.

The Cut To The Chase die-cuts are pretty cool; they use a Finest technology with a refractor coating and die-cut. Even though the cards appear to have a texture they are actually smooth.

Topps includes a manufactured patch in each blaster box. I pulled two silk patch cards and a Cespedes commemorative patch. I cannot complain, I really like all three cards.