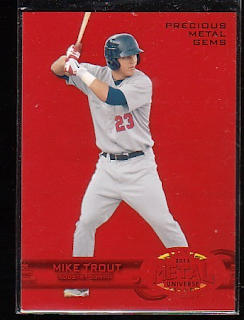 Later this year Upper Deck will be bringing Fleer Retro Baseball to the shelves, an MLBPA approved product. Upper Deck has worked a deal with the MLBPA to release two approved sets, Fleer Retro and a set that will be announced later this year. Additionally they will be releasing 2013 Sweet Spot Classic, a set made up entirely of retired players.
Last year Upper Deck worked a deal with the MLBPA to release the 2012 SP Signature Edition, which was just horrid and had almost no redeeming qualities. With Fleer Retro Baseball, collectors will have some idea of what to expect, as for the unannounced release that is a different story. Hopefully SP Signature Edition does not make a return in its current form.
Retro will include some Fleer insert favorites like Metal Championship, Ultra Stars, Hot Glove and EX A Cut Above. Upper Deck even included Mike Trout Precious Metal Gems in random promotional packs that were handed out at the Las Vegas Industry Summit. Some of the cards have begun showing up on eBay, so far I have only seen Red Gems (#/100) and Blue Gems (#/50) versions, no Green Gems (#/10) have shown up for auction yet. 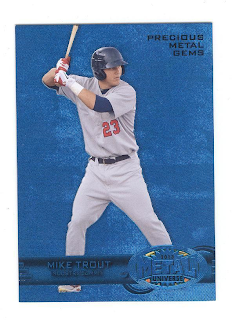 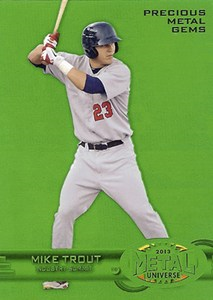