Is Colin K. About To Become A Bronco?

No, this is not a late April Fools Day prank. 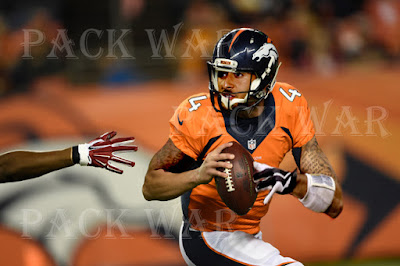 It is reported that the Denver Broncos, the 49ers and Colin Kaepernick have come to an agreement on a trade for Kaep to the Broncos. Apparently the only thing holding up the trade is a restructuring of Kaepernick’s contract. The 49ers are expected to get a mid-round pick from the Broncos in return.


When it came to making Kaepernick a Bronco I was at a bit of a loss, obviously #7 is out of the picture for his jersey number (Elway’s #7 was retired). So I went to his college number, which was #10 when he played for the University of Nevada-Reno, but that belongs to Emmanuel Sanders and I was left with his high school number, which was #4.  Punter Britton Colquitt, who has been with the Broncos for 6 years, wears the #4 jersey but if Kaepernick was going to purchase a number from another player I would think this would be the cheapest option.


I ended up using Broncos third-string QB Trevor Siemian for the image base, add Kaepernick’s face and arms, a couple of adjustments to the jersey, levels and colors and we now have Colin Kaepernick playing for the Denver Broncos.
Posted by Corky at 4/02/2016 06:52:00 PM