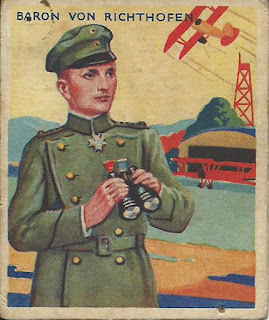 This month’s VCoM comes straight from my Top 10 Want list. A 1933-34 National Chicle Skybirds Baron Manfred von Richthofen, who was also known as the Red Baron. This set is a bit of a pain because half of the cards were released in 1933 and the other half in 1934 yet all of the cards are listed with a copyright of 1933 so some people tend to get confused about their issue date.


Ever since I watched Snoopy take on the Red Baron when I was a kid I have been interested in Richthofen. Manfred was the top ace of WWI with 80 victories, doubling up his brother Lothar, and was the #1 target of Allied flyers. What most people don’t know is that he actually started as a cavalry officer but became enamored with aeroplanes and realized that the cavalry was a dying occupation so he requested a transfer to the Air Service in mid-1915.


The write-up on the back is interesting, it makes it seem as if Richthofen was a mindless killer saying that he killed 100 men by shooting them, burning them and crushing them. He wasn’t a sociopath, he was actually quite brilliant and a great tactician.


The back also errantly lists that Canadian pilot Captain Roy Brown was the person who downed the Red Baron when in fact it is now believed that he was actually shot by one of three machine gunners (Sgt. Cedric Popkin, Gunner W.J. Evans or Gunner Robert Buie) with the Royal Australian Artillery. He was also alive when he landed the plane behind the Australian lines and remained alive long enough to talk before succumbing to a chest wound. Though I guess the truth of being shot down by an anonymous gunner and landing safely isn’t as glorified as National Chicle’s version. 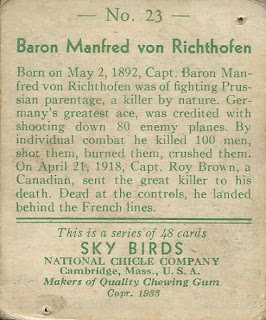 The card is in beautiful condition, still solid cardboard that has held its shape. The colors have muted a bit, the corners are rounded and there are two thumbtack holes (top left and bottom right) but condition-wise it is my best card of the three National Chicle Skybird cards that I have in my collection. I would love to eventually add a better graded copy with brighter colors to my collection to replace this one.
Posted by Corky at 4/13/2016 06:02:00 PM