With the NFL Draft two days away two former First Round draft picks, who both wore #2, are in the news.

The failure that is JaMarcuss Russell, the 2007 #1 pick, has announced in a recent SI interview that he is willing to play one season in the NFL for free. He even sent a letter to Dallas Cowboys owner Jerry Jones saying that he will start from the bottom working with the practice team to learn the playbook. Jones is a big proponent of giving questionable players a second chance but Russell has not played a down since 2009 and has only had to one workout with a team since, in 2013 with the Bears. 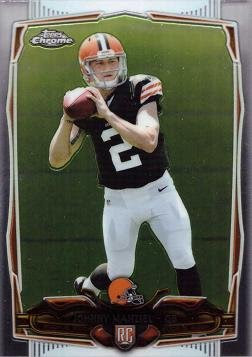 Also in the news in Johnny Manziel who was indicted today in Texas on assault charges on his ex-girlfriend. Normally I wouldn't give Manziel and space on my blog but his life has been in free fall since January and he is flirting with jail time now, the assault charge is a misdemeanor with up to one year in jail and fines. America loves to watch a train wreck but when the person is destroying their body with drugs and alcohol he is beyond a train wreck and his family is fearing he may not live to his next birthday. In this case jail may be the best option to help Manziel. I am willing to bet that he won't see any jail time and a minimum fine because affluence seems to be a viable defense in Texas.

Personally I hope they both just move on and stop trying to add more of a media circus to the NFL.