No Go On Colin K 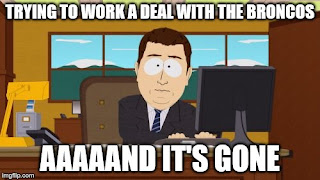 OK, looks like we can stop on all the talk of Colin Kaepernick going to the Broncos. The big issue has been his salary, the Broncos wanted either the 49ers to cover $4 million or Kaep to restructure his contract to accept a $7 million a year deal.

I have seen arguments on both sides with some people saying he should have taken the cut to QB a team coming off of a Super Bowl win while others point out that why should he take a pay cut where if he just stays in San Francisco he will make the $11 million plus bonuses. I have never been in his shoes so I don't know where his mind is at right now and I guess the deal still could work out but I am guessing the Broncos are just going to look elsewhere instead of squabbling over money neither is willing to budge on.

I wouldn't be surprised to see the Broncos turn to turn to Ryan Fitzpatrick of the Jets or possibly Nick Foles from the Rams.
Posted by Corky at 4/05/2016 06:37:00 PM