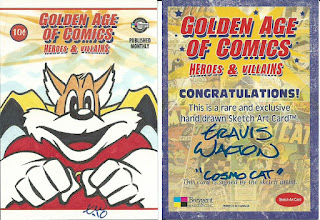 This month’s Art Gallery display comes from Breygent’s 2010 Golden Age Of Comics Heroes & Villains. The artist is Travis Walton, a comic book illustrator, who has sketch cards in many of the major sets from Cryptozoic, Breygent and Upper Deck.


The release was built around 40 base cards and covered Golden Age comic book heroes and villains that have long disappeared in to Pop Culture lore. You won’t find Superman, Batman or Captain America here. The sets selling point though was the sketch cards and with nearly 100 artists producing 20+ sketch cards each there are plenty from which to choose.


I went with this Cosmo Cat because the card is well drawn, the character himself was never a big “hero” and only appeared in 10 of his own comic books and then another 16 comic books under different titles like All Top Comics and Woatlife Comics. But he did live on the moon in his lab and saved Little Red Riding Hood so he has to be pretty cool.