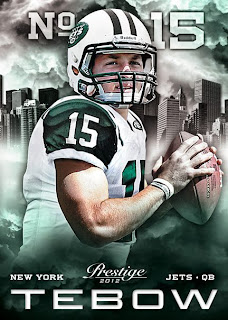 Over the last few years I have attempted to support Panini, but at times it seems difficult because their designers tend to put out as many crappy designs as decent designs. Then there is the occasional release that leaves you wondering, even dumbfounded.

Recently, between their blog and Facebook pages, Panini released preview images for a 15 card Tim Tebow insert set that will be included in to packs of 2012 Prestige Football which is coming out at the end of the month. 14 cards will depict Tebow in his Broncos uniform and 1 card will be of Tebow in his Jets uniform. There will also be 15 autographed versions of his Jets card.

Now right about now you have probably begun to ask why this set was created. That would be the $64,000 question. He was traded 3 months prior to the release of the insert and while scraping the set, designing a new product and printing the new cards would be a difficult undertaking, it is not impossible.

None-the-less, the question still remains unanswered, why create an entire insert set of a 2nd year player who in two seasons has played in 23 games, thrown 167 completions with under 50% completion rate for a little over 2,300 yards and he threw more than half as many interceptions as touchdowns?

Yes, he had a great college career but that has not carried over well to his pro career as of yet. This is the same player that John Elway and the Broncos could not get rid of quick enough after signing the 36-year old Peyton Manning who is coming off of neck surgery. He came in to the Jets, who already have a questionable QB, as QB #2 and is expected to see limited QB time and will likely play mostly in Wildcat situations. It seems that the Jets see him as expendable or why else would they put him on the punting team? I understand that he will probably be used for the occasional fake punt but do you really want to put your Second-String QB on the field during punts when they can get hurt quite easily?

I am just completely floored when I saw this insert set. Denver fans are not going to want the cards with an ex-player that basically spent one season as starter and then was gone; Jets collectors are not going to want most of the cards because he is only depicted on one card in his new Jets uniform. What is funny is that on Panini’s blog people are gushing about the cards but on Panini’s Facebook page there are a whole hell of a lot more collectors ripping Panini and the insert.

I know he is a popular player for a number of reasons, including his college career, his solid morals, he stays out of trouble and when he does play he is fun to watch because he is a wildcard plus he gives 110% whenever he is on the field but this set may be a gamble by Panini. 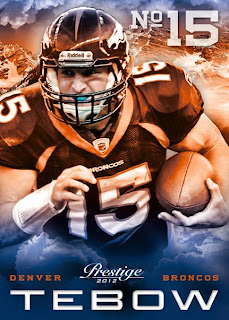 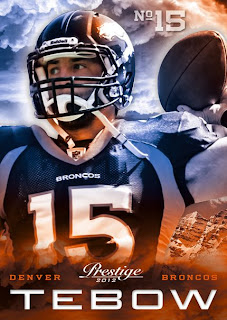 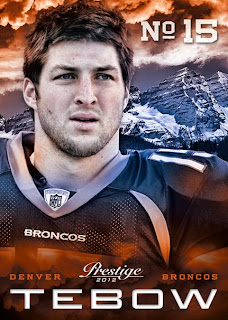 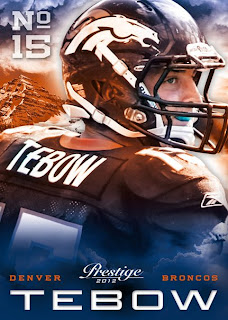 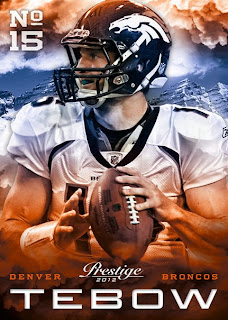 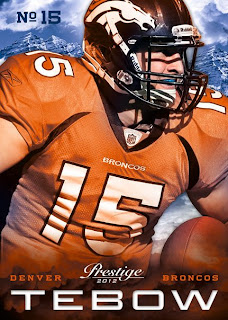 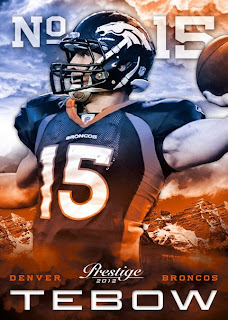 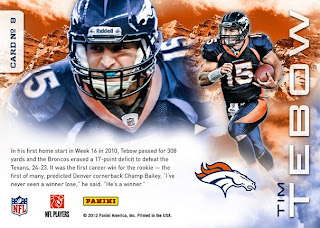 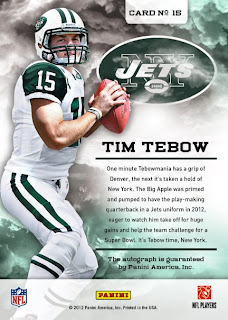