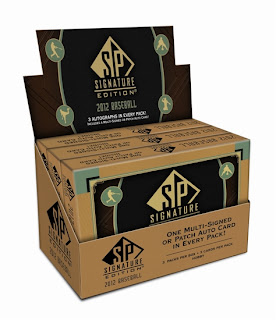 Next week (July 3) Upper Deck is releasing a set that I think can be likened to a lottery ticket. In an unexpected announcement from Upper Deck in late April they stated that SP Signature Edition Baseball was back and would be released the following week on May 1st, each 3 pack box (3 autos per pack) would run $255 and a box break would include 6 base autos and 3 multi-signed or manufactured patch autographs. In the announcement they only included images of the box and packs and some basic information regarding the various subsets and some numbers pertaining to the serial numbering. Obviously the May 1st release date has come and gone and everything remained quiet, many of us figured that the release was being delayed/cancelled due to Upper Deck’s ongoing legal battles.

One thing that was for certain is that without any baseball related licensing this was a sticker dump, cards were expected to be pretty basic, no logos, no team names and possibly no player names or images. In a sense you were paying close to $300 for a chance to pull 9 stickers and maybe 1 or 2 manufactured patches.

Now almost 2 months after the original announcement and we are finally hearing some news about the 2012 SP Signature Edition Baseball release. The product will be arriving on shelves on July 3rd and best of all, the reason for the delay; it will arrive with licensing from the MLBPA. This is a one-time license approved by the MLBPA for use with the 2012 SP Signature Edition Baseball product only and was apparently part of an agreement for UD to pay on money that is owed to the Player’s Association.

There are still some big questions, because there have been no images released and there has been no checklist released so people are left wondering what the cards will look like and who will be included. The MLBPA license helps but does not answer the questions. Some of the highlights of the set that have been announced about the included subsets will contain signatures from players connected to these events/honors: