The National Sports Collectors Convention is returning to Baltimore this year and will run from August 1st-5th at the Baltimore Convention Center. With a little over one month before the doors open we are beginning to see special releases and exclusives that will be offered to collectors.

So far we have seen teasers for the VIP sets from Topps and Leaf. Topps will be giving each collector who has purchased the VIP or Super VIP packages an exclusive 4-card pack. They have released 5 images so it is uncertain if the set will contain only the 5 cards or if the checklist will include additional players.

The Topps set is based on the very popular 1952 Topps Baseball set but will include each player in a Minor League uniform. Currently there are two Mickey Mantle cards; one depicts him in a Yankees uniform. These are not actually images of the players from their Minor League days, Topps designers Photoshopped Major League images but they are still pretty cool.

Jackie Robinson in his Montreal Royals uniform, he only played one season (1946) in Montreal before moving on to Brooklyn but what a season it was. He took the team to the Junior World Series beating the Louisville Colonels for the Triple-A Championship. He led the league in batting average and fielding percentage and was named the International League’s MVP. Mickey Mantle in his Joplin Miners uniform, he played only one season (1950) at Class-C Joplin before moving on to the Triple-A KC Blues in 1951 for 40 games and then eventually making it on to the Yankees roster before the end of the 1951 season. He led the team in Batting Average, Hits, Doubles, Triples and Home Runs. 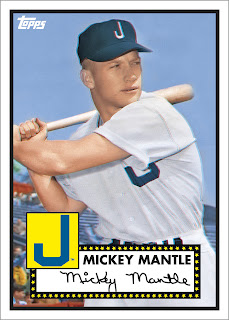 Mickey Mantle in his New York Yankees uniform, he appears quite young in the photo and since Mick’s first Topps card is the 1952 Topps Baseball I am going to go out on a limb and say this is from the 1951 season, his first season in the Majors. In 1951 Mantle began the season in Triple-A so he only played 96 games in New York. He had a mediocre season and ended the season on IR after injuring his knee in Game 2 of the World Series but what started tough ended 18 years later in a Hall of Fame career with 7 World Series Titles, 3 AL MVP Awards and the 1956 Triple Crown. 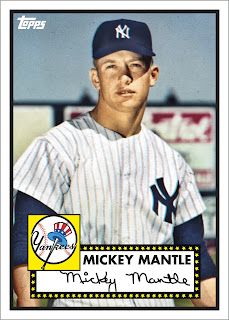 Babe Ruth in his Baltimore Orioles uniform, like the other players on this list he only played one season in the Minor League playing with both the Baltimore Orioles and the Providence Grays plus 5 games with the Boston Red Sox (4 games as pitcher) between his time in Baltimore and Providence. He played a total of 46 games in the minors including 35 as pitcher (in which he started 30 games). His pitching record was solid going 22-9 with a 2.39 ERA. His batting was definitely not a sign of what was to eventually come, hitting a dismal .231 Batting Average with 28 Hits. 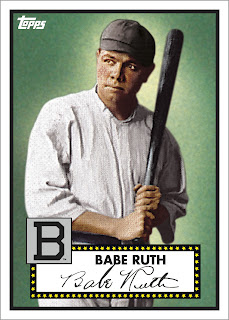 Willie Mays in his Minneapolis Millers uniform, his second season in the Minors. He actually played a season from the Birmingham Black Barons in the Negro Leagues in 1948 when he was 17 but his first MLB game came in 1950 with the Trenton Giants, a Class-B team in the New York Giants organization. After he killed the ball in Trenton he was moved up to the Triple-A Millers where he not only killed the ball but he smacked it up, flipped it and rubbed it down (How many of you just read that sentence and finished it up with “Oh No!”?) 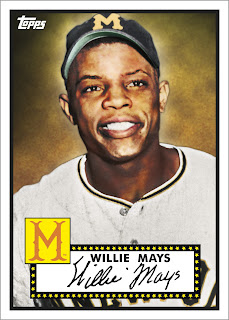 He only played 35 games in Minneapolis before moving on to the Big Leagues and when it all closed out he was a Hall of Famer, one World Championship, two NL MVP Awards and a whole slew of honors and awards including 660 Home Runs, which put him #3 on the All-Time Home Run list before his steroided up God Son over took everyone by knocking baseballs in to McCovey Cove like he was swatting away flies. Another player with an "*" afixed to his name is moving up quickly and is now less than 20 Home Runs behind Mays.
Posted by Corky at 6/25/2012 11:57:00 PM