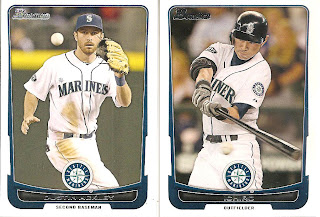 For Father’s Day my kids gave me a couple of rack packs, a 2012 Bowman Baseball rack pack and a 2012 Bowman Football rack pack. These are the value packs that contain 3 packs and 3 Purple Prospect parallel cards. Opening these packs was like taking a walk through the woods, I hit some nice highs and a lot of lows. It was like a roller coaster with each pack.

I got a nice selection of base cards like Pablo Sandoval, Matt Cain (OK, the guy has a .510 win percentage but he did just throw a perfect game), and Mark Trumbo (the guy has potential) and most importantly a pair of Mariners in Ackley and Ichiro. A couple of dismal RCs were pulled, Liam Hendriks and Addison Reed, a pair of pitchers who are 1-5 between them in the Minors.

The Bowman Prospects that I pulled could best be described as “Bipolar” at best, starting out on nice high with Mike Murray. A young guy in the Giants organization, he has been moved from catcher to DH (on an NL team really?). In his first two seasons he has moved from AZ Rookie league to A and is expected to be moved up to AA Richmond before long. Follow this up with severe low, Ian Gac, the guy has been in the league 10 seasons and has never cracked Double AA and his lifetime .251 BA and 1130 Strike Outs will not help his case. Finally I end on a high (with a caveat) with Drew Hutchison. He is young, he is 5-3 in 11 starts and while he has a 4.60 ERA his 1.35 WHIP puts him among the top 50 pitchers of the current season. There is one glaring concern about the kid, his elbow injury.  He is looking at Tommy John Surgery so his future is a big question mark right now.

Purple parallel: Greg Billo, Tyler Collins and Luis Angel Sanz. Billo and Collins are young and have a nice upside; Sanz on the other hand is a Minor League lifer who is floating around Detroit’s organization and at his current rate may never see the AA level. 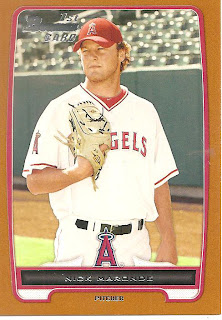 Closing out with the Chromes: Jose Campo, another Maronde, Jose Vinicio, JT Wise and Luis Heredia.

Campo came over to the Yankees in the Pineda-Montero trade and like Pineda he went down with an injury. He was actually starting the season well before the injury and may be a force in the New York lineup in the future. 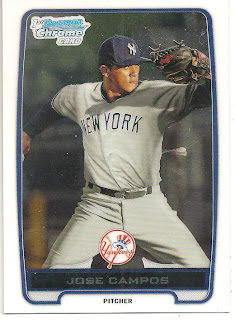 Vinicio is just 18 but this is his third season in the Red Sox organization. He has quick hands and is expected to be a defensive fixture at the SS position but right now he is not showing it with 18 errors in 217 chances this season. What caught me is this kid looks young, yes he is only 18 but on the card he looks 12 years old maybe 13 on a good day. 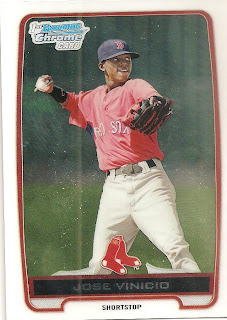 JT Wise is coming along slowly but he may turn in to a solid backstop for the Dodgers in a couple of years unfortunately he is 26 and needs to get in to high gear if he wants to make it to the Show.

Luis Heredia, when this kid was 15 he had teams lined up to offer him millions in a signing bonus. When the signing period opened (per the Mexican Baseball League) the Pirates signed him for $2.6 million and he was 16 at the time. Apparently the team has been scouting this kid since he was 13 years old. Here is the kicker, when a MBL team sells the rights of a player they keep 75% of the signing bonus meaning his old team keeps $1.95 million and Heredia gets only $650,000 from his bonus. He started the season on Pittsburgh’s Class A SS team, the State College Spikes. 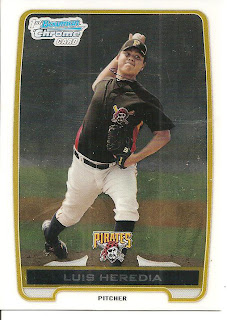 I close out on a Joe Benson Bowman Best. I have always been a fan of BB and this year is no different. While I am not excited to see Joe Benson I am happy I pulled one anyway. Benson had a cup of coffee with the Twins last season but could not cut it. He started 2012 in AAA but was hitting a disappointing .173 before injuring his hand which requires surgery. As of the end of May he was looking at a minimum of 6 weeks on the DL depending on his rehab. 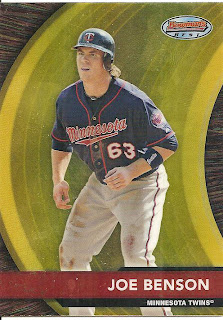