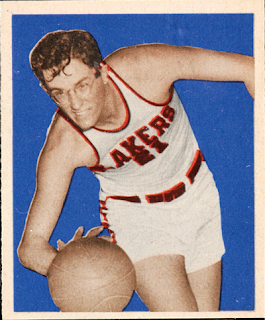 Please note that I do not own this card I am using an image pulled from Google Images.

Because tomorrow is the NBA Draft I wanted to go in that direction with this month’s Vintage Card of the Month which comes from the 1948 Bowman Basketball set. When the set was released the NBA was only around for 2 years and was known as Basketball Association of America. It did not become the National Basketball Association until 1949. At this time there was still a question of whether the league would even be around for very long and the next basketball set would not be released until Topps put out a set in 1957 after purchasing Bowman the year before. Fleer came in to the game in 1961 and then Topps returned to basketball in 1969, from there the rest is history.

The 1948 Bowman Basketball set was almost a “test” set, it is essentially the same design that Bowman used with their first baseball set but they added color. The cards used a colorized version of a black and white player image and this was placed over a colored background. There were no player names, team names, team logos or even Bowman name/logos.  The backs were basic too, a card number, player info and a bio write-up.

The set was released in two series of 36 cards each, for a total of 72 cards in the set. The second series is the more rare series with George Mikan’s rookie card (card #69) being the treasure of the entire set.

George Mikan was only 31 years old when he finished his career in 1956 and over his 10-year playing career he won 7 Championships (2x NBL and 5x NBA) along with a long list of awards and records. In 1950 he was selected the "Greatest Basketball Player of the First Half-Century" and in 1996 he was named one of the NBA's 50 Greatest Players.

Some collectors may not recognize the name but he changed the sport of basketball, I mean literally. The NBA made a number of rule changes regarding the size of the lane, the addition of the shot clock and while he was the ABA Commissioner he made the addition of the 3-Point Line. When he passed away in 2005 Shaq offered to pay for his funeral saying "Without number 99, there is no me". Shaq is definitley known for his lack of common sense and saying things that you would expect to hear from a 5 year-old but this was a class offer on his part.

Even today his cards are demanding a premium, low graded 1948 Bowman rookie cards are easily going for $750-1,500 and a couple of years ago a PSA-10 Gem Mint sold through Memory Lane auction for $218,500 ($186,000 auction price plus buyer's premium fee). His autographs run from $100 and up with his on-card autographs selling for a premium. Panini has started adding Mikan relic cards to their National Treasure releases over the last few years, single color relics are going for under $50 but multi-color relics are hitting well over $250 each.
Posted by Corky at 6/27/2012 11:56:00 PM